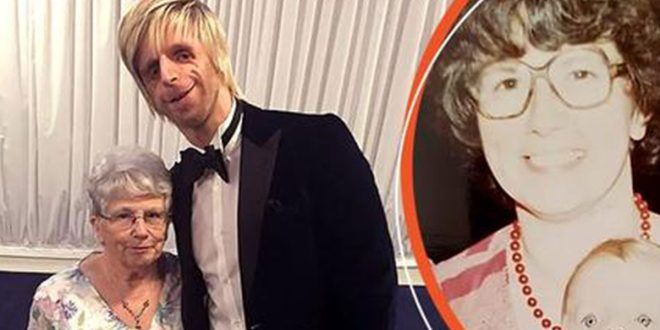 When Jono Lancaster was born, his parents made a decision not to take him home from the hospital. The syndrom he was diagnosed with, Treacher Collins syndrome, a rare disorder that affects the facial structure and hearing abilities, was the reason they weren’t able to love him. Having the syndrome meant plenty of hospital visits and probably surgeries, and they weren’t willing to go through such an experience.

Sadly, Jono was just a few days old when he was forever abandoned by those who were supposed to love him unconditionally.

In the days that followed, social services did all in their power to find a suitable family for him. Luckily, an angel in the form of a loving and caring woman named Jean crossed paths with Jono. The moment she laid eyes on him, she knew he belonged with her. “How could you not love a child?” she said after hearing his story. “When can I take him home?” was the next question she asked.

Jono first shared his life story with the National Organization for Rare Disorders (NORD) Breakthrough Summit back in 2015 and gathered the attention of many.

“I was born with a genetic condition that affects my facial features. I have no cheekbones, and so my eyes dip down,” he said. “I love my little ears, they don’t get cold at night. But I do need hearing aids. I’m one of the lucky ones. More severely affected individuals need help with feeding and breathing. I met some kids who’ve had more than 70 surgeries to correct problems that would make their lives easier.”

Speaking of Jene, the woman who provided him with a loving home, Jono says:

“Jean adopted me on May 18, 1990 – so I get two birthdays!” he said. “I used to tell other kids that my mom went to the hospital and she looked at all the babies and she chose me, whereas their parents had been stuck with them.”

Jean tried to get in touch with Jono’s birth parents multiple times, but each attempt ended with the same response from their side; they didn’t want to have anything with him, not even meet him.

Most of his life, Jono, who is now 36, experienced every form of bullying because of his looks.

“When I became a teen, I began to think, why me? That snowballed into thinking about my birth parents. Parents are supposed to love you no matter what, even if you rob a bank. How would I ever have a family? Who will want me?” he said. “I started to hate my face. I became aggravated at not being able to change the way I looked. I avoided looking at my reflection, even in windows walking down the street. I was ashamed of the way I looked.”

But then something happened that helped him regain his self-confidence.

While he worked as a bartender, everyone stared at him and commented on the way he looked. But one day, a ‘skinhead’ customer who appeared fierce and had ‘muscles on top of muscles‘ entered the place. No one wanted to serve him, but then Jono stepped in. “Before you get my drink, I have a question. What’s up with your face?” the man said.

“I was born with Treacher Collins syndrome.” The man responded with “all right.” Then Jono added, “I’m deaf,” and showed him his hearing aids. “Do they come with an off switch?” the man asked. “Damn, you’re lucky. I have a wife and all she does is talk 24/7, and to be able to switch her yakking off…”

For the first time in a while, someone laughed with Jono instead at him. That reminded him that he needed to “focus on the good.”

Today, he has a partner and works as a motivational speaker. Jono makes sure he spends time with young children who have the same syndrome as him and helps them accept themselves the way they are.

“So what’s changed?” he said. “People are still the same. My parents still want nothing to do with me. What’s changed is my attitude, and that’s so powerful. Instead of allowing negative energy to bring me down, I believe in myself. I wouldn’t change any of it. My attitude was more disabling than anything. With the right attitude, you can achieve anything.”

We are so glad this man learned how to love himself for who he is.

Share
Previous Dad shaves daughter’s head after she bullies girl with cancer and pulls off her wig
Next Check Olivia Newton-John’s Final Photo. It Leaves Us In Tears