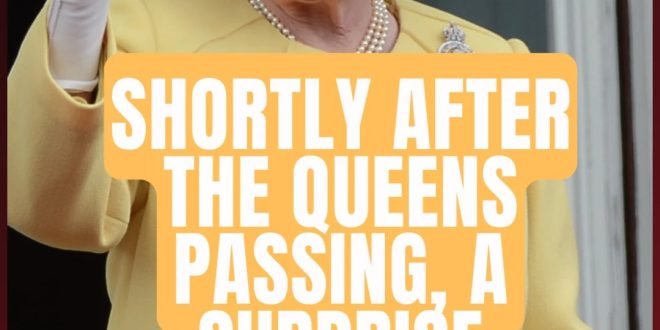 Heart-breaking news from Buckingham Palace comes just hours after news broke that Queen Elizabeth II was in bad health. Now, people are talking about the surprise in the sky.

At 96 years old, the longest reigning British monarch has passed away. In a statement shared by Buckingham Palace, it read:

King Charles also shared his own personal statement, writing, “The death of my beloved Mother, Her Majesty The Queen, is a moment of the greatest sadness for me and all members of my family.”

His Majesty continued, “We mourn profoundly the passing of a cherished Sovereign and a much-loved Mother. I know her loss will be deeply felt throughout the country, the Realms and the Commonwealth, and by countless people around the world.”

“During this period of mourning and change, my family and I will be comforted and sustained by our knowledge of the respect and deep affection in which The Queen was so widely held.”

Now, people are in awe over the surprise that appeared in the sky just over Buckingham Palace hours after the Queen passed away. As photos show a double rainbow appeared as people gathered around the palace to mourn together.

A single rainbow also appeared over Windsor Castle as well.

According to earlier reports, her Majesty remained in Scotland under medical supervision. In a statement released Thursday morning by Buckingham Palace, Elizabeth was resting in Balmoral castle.

“Following further evaluation this morning, the Queen’s doctors are concerned for Her Majesty’s health and have recommended she remain under medical supervision,” the statement said. Balmoral is where the Queen often spends her summers.

After doctors revealed their concern for Queen Elizabeth, who is 96 years old, her son and her grandson, the two next in line for the thrown traveled to Balmoral to be with her Majesty. Prince Harry, who was in London with Meghan Markle for an engagement also travelled to Scotland for one final goodbye.

Just two days ago, Queen Elizabeth met with Truss at Balmoral where she was asked by the Queen to form a new government following Boris Johnson’s resignation. However, while meeting with Truss on September 6, she announced that she would not meet with the Privy Council, her body of advisers, after doctors advised her to rest on September 7.

Truss later took to Twitter to respond to the reports of Elizabeth’s failing health. She wrote, “the whole country will be deeply concerned by the news from Buckingham Palace this lunchtime.”

“My thoughts — and the thoughts of people across our United Kingdom — are with Her Majesty The Queen and her family at this time,” Truss continued.

Previous Tina Turner says farewell to her fans!
Next This little girl’s entire life has been a struggle.