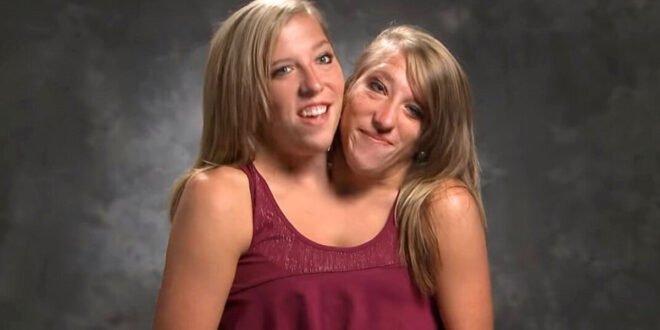 Abby and Brittany Hensel are the world’s most famous conjoined twins. When they were born on March 7, 1990, their parents were left in complete shock. They were expecting one child only and everything seemed fine until two heads popped up during delivery.

Once the girls were out, everyone stood silent for 30 seconds, Dr. Joy Westerdahl explained.

“They had a pretty crude way of telling me,” father Mike Hensel recalled speaking to Content. “They said, ‘They’ve got one body and two heads.’” The girls’ mother, Patty, who was still under sedation and only heard the word “Siamese” asked in confusion, “I had cats?”

The girls were transported to another hospital where doctors determined that despite their condition they were perfectly healthy.

According to statistics, conjoined twins don’t even get to be born, and in case they are, most of them die on the first day of their life. Abby and Brittany, however, beat the odds.

During the first days of their lives, they had undergone a surgery through which doctors removed a third arm between their heads. A separation surgery was offered to the parents, but they refused one, because the chances of survival were extremely small and in case they pulled through, the girls would have been left severely disabled and they would never get a chance to play football, or drive a car, something they do today.

Abby and Brittany have two hearts, two stomachs, three kidneys, and four lungs – two of which are connected. They share one liver, one chest, intestines, one bladder, and have single reproductive organs.

Their nervous system is partially separated, so they experience separate feelings of hunger, as well as separate urges to urinate and sleep.

The girls became famous worldwide after appearing in an episode of The Oprah Winfrey Show at the age of 6. Ever since, all eyes were on them. Eventually, they got their own show on TLC through which they presented the world what their lives as conjoined twins looked like.

Besides living as one person, the girls are complete opposites. They have different characters, different desires and dreams. While Abby wanted to be a dentist, her sister wished to become a pilot one day.

“It’s gonna be kind of hard in the cockpit when one’s flying and the other one’s working on someone’s teeth,” their father Mike joked. “They are already asking if they might someday find a husband. They’re good-looking girls, they’re witty, they’ve got everything going for them, except… they’re together.”

When they turned 16, the girls got their driver’s license. “Abby does the pedals and the gear shifter,” Brittany told the Daily Mail at the time. “I take over the blinkers and the lights. But she likes driving faster than me.”

A post shared by Abby and Brittany Hensel (@abbyandbrittany)

Of course, just any other girl out there, Abby and Brittany dream of getting married and even have children one day.

“The whole world doesn’t need to know who we are seeing, what we are doing, and when we are going to do it,” Brittany said. “But believe me, we are totally different people.”

“Yeah, we are going to be mums one day, but we don’t want to talk about how it’s going to work yet,” Abby added.

After graduation, these girls found a job as 5th grade teachers at Sunnyside Elementary school, Minnesota.

However, although they both have licenses, they receive a single salary.

“Obviously right away we understand that we are going to get one salary because we’re doing the job of one person,” Abby told BBC. “As maybe experience comes in we’d like to negotiate a little bit, considering we have two degrees and because we are able to give two different perspectives or teach in two different ways.”

“One can be teaching and one can be monitoring and answering questions,” Brittany added. “So in that sense, we can do more than one person.”

Speaking of hiring conjoined twins, the school supervisor Gerri said, “We had concerns about the student would respond because it’s such a unique and special situation. It was really important for us to give the students that exposure visually and we had an open Q&A for them.”

School principal, Mr. Moberg added: “I would not hesitate in a minute to put them in a classroom. and hire them. There’s no question in my mind that they will change the world for the better and influence lives in a way, as an individual as myself, would never be able to do.”

A post shared by Abby and Brittany Hensel (@abbyandbrittany)

These twins lead fulfilling lives and are happy the way they are.