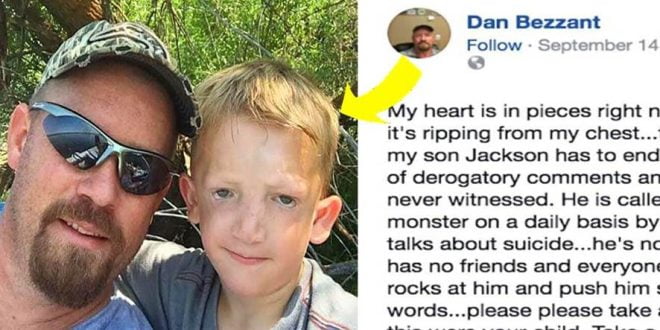 After his son was branded a ‘monster,’ Idaho dad teaches bullies a brutal lesson

Bullying has long been present at schools, the places where a child should feel safe and protected. Many times, these institutions simply ignore the problem and assure parents that something like that never happens, which of course isn’t true. Other times, they do take action against bullying, but that doesn’t help put a stop to the problem.

The truth is that bullying can have long-lasting effects on the victim, such as crashed self-esteem and inability to socialize later in life after falling a victim to this cruel treatment.

One father, whose son has been diagnosed with Treacher Collins syndrome, decided to step up for his boy who was branded “ugly” and “monster” by the rest of the students.

The condition affected Jackson Bezzant’s hearing, so he’s nearly deaf. The syndrome also leads to distinctive abnormalities of the head and face where cheekbones, jaws, palate and mouth are underdeveloped.

Jackson was forced to undergo a surgery to rebuild his eye socket and is expected to have more surgeries in the years to come.

Although he’s a loving and happy kid, he’s been severely bullied at school. It also happens very often for random people to comment on the boy’s face while he’s out with his father Dan, but Dan tends to keep a cool head in such situations. What he couldn’t put up with, however, was the bulling at school.

One day, he learned that while his son was having lunch at the school cafeteria, some boys approached him and started calling him names. This torment lasted for some time until a teacher noticed what was going on and intervened.

Dan’s heart was shattered. He knew he needed to take action so he decided to pour his heart out through a post he shared on social media hoping that his words would touch the parents of Jackson’s bullies.

“My heart is in pieces right now and my soul feels like its ripping from my chest,” Dan began his post, according to People Magazine.

“This beautiful young man, my son Jackson, has to endure a constant barrage of derogatory comments and ignorance like I’ve never witnessed. He is called ugly and freak and monster on a daily basis by his peers at school. He talks about suicide and he’s not quite 8!

Dan further wrote: “He says he has no friends and everyone hates him. Kids throw rocks at him and push him shouting these horrific words. Please please take a minute and imagine if this were your child. Take a minute to educate your children about special needs. Talk to them about compassion and love for our fellow man.

“His condition is called Treacher Collins. Maybe even look it up. He’s endured horrific surgery and has several more in the coming years”, Dan wrote.

He then added that he doesn’t blame the school or the teachers because they do their best to prevent bullying from taking place. But he wants parents to read his message and learn something from it.

“I want parents to see my post and feel my heart break. Please educate your children and let them know that bullying is not OK. Please share this. This shouldn’t be happening to anyone”, Dan said.

The post quickly went viral and in no time, to Dan’s surprise, some kids reached to him and told him how they wanted to be Jackson’s friends. Parents of two other children with the same condition as Jackson living in the area also got in touch with Dan and the families are now organizing a playdate.

We are so happy the community didn’t stay deaf to this father’s plea. We truly hope that more parents would take their time to educate their children that everyone should be treated with respect, despite their condition.

Previous ‘We’re going to be kicked out because we haven’t paid rent for months’
Next Steven Seagal, His Net Worth, Family, Wife, Children, Height, and Career