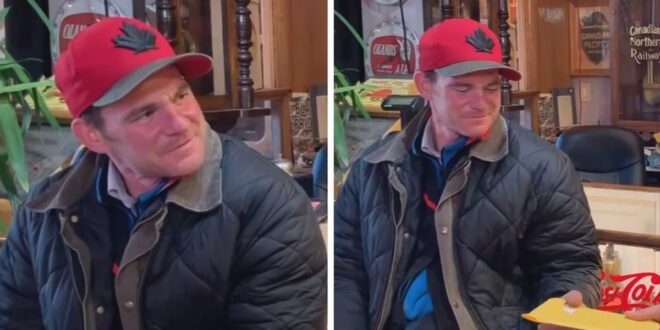 Alexander Archbold is the owner of one of the most breathtaking antique shops, Curiosity Inc., where the magic of the ‘ancient’ times wraps all around you and makes you feel as though you entered a completely new world. Various vintage collectibles, oddities, and antiques beg you to take them home and elevate the warmth and the beauty of your place.

The shop is located in Edmonton, Alberta, and the fun thing is that a lot of the items there are brought by a homeless man named Adam.

This man is going through dumpsters, and he often comes across various items people throw.

“It’s not unusual to have people walk in my store with treasures they have for sale,” said Archbold. “I’ve seen him [Adam] through the store many times before, so he’s always a welcome sight.”

On that day, Adam had in his hands a plastic bag full of different items.

“One piece that kind of stood out was a picture of Bambi, in what was a dirty broken frame,” said Archbold.

“It’s the scene where Bambi is just born and meeting his forest friends … It’s an iconic part of the movie.”

Archold knew Disney fans are interested in bying such pieces so he though he could buy it for $20 and eventually sell it for $100 after he replaces the frame.

But, once he took it out of the broken glass, he was left stunned. It wasn’t a cheap replica as he initially though. In an interview with Carol Hoff, he said:

“I took it out of the old frame and when I flipped it over, it had a really old certificate of authenticity. It had a copyright date of 1937 on it.”“I wrote a gallery in the U.S that had one, and they were asking $3,500 for theirs.”

“That’s when I knew that I way underpaid. So I vowed that whatever I would get, I would give [Adam] half [the money].”

Once the piece was put on auction on eBay, it was quickly sold for $3,700. Now the only thing remaining was to find Adam and give him his share.  “Getting him the money was difficult because he has no home and no phone number,” Archbold explained. “I took it upon myself to drive around town for a period of two weeks every single morning before work to try and find him.”

When he finally tracked the homeless man and handed him the cash, Adam immediately burst into tears. He couldn’t believe how kind Archobald was for doing that good deed. This meant the world to him.

Archobald knew he had to take things in his hands and do his best to take Adam off the streets. His plan was to buy him a plane ticket to Ontario, where his family is. He even started a GoFundMe page and set up a goal of getting $10,000. Compassionate people like Archbold himself, donated even more.

“I’m still kind of pinching myself,” Adam told CTV News. “It doesn’t seem real to me. It’s awesome to know people are out there that care and that are kind.”

The story of Adam vent viral and people are thanking the shop owner for helping a man in need.

“This made my heart feel so warm. You are one fine man. Your heart and feelings make the world a more positive place.”

“Very touching. I wish everyone was this compassionate. The world would be a different place.”

“That was one of the best videos I have seen.”

Take a look at the whole story in the video below and make sure you share it with friends!