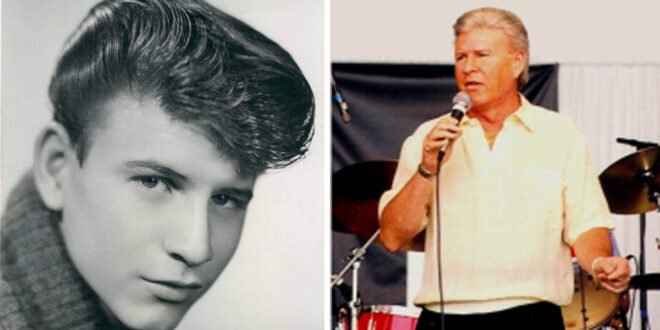 Bobby Rydell was a huge sensation back in the 60’s. Considered by many a teen idol everyone admired and was obsessed with, he stole the hearts of millions of fans from the States and all over the world.

It was his father who convinced him to pursue a career in the showbiz as he knew his son was a huge talent. When he was just four years old, Rydell would sit in front of the TV and would impersonate performers like Milton Berle, Louis Prima and Johnny Ray.

Rydell’s career as a musician started after he won a talent show at Paul Whiteman’s TV Teen Club. From that moment on, he would perform with various bands in his hometown of Philadelphia and would sign his first ever contract. With his devoted father as his manager, it seemed the sky was the limit for this talented and good-looking young man.

During the early 1960’s, Rydell already got some huge hits that remain famous even today, such as “Wild One”, “Volare” and “We Got Love.” It wasn’t surprising his incredible pieces of music reached the top of the charts. Besides singing, he tried himself in acting too. He played the role of Hugo Peabody in the musical Bye Bye Birdie, a movie that would place him on the list of the most famous showbiz performers of all time.

”I screen-tested with Ann-Margret and it must have looked good because they kept adding more dialogue and more songs for us in the movie. I am not a movie star by any stretch of the imagination, but I was lucky to be in the film. It’s a classic,” Rydell told Connecticut Magazine.

However, when he was at the peak of his career, British music became extremely popular in the U.S. and everyone went crazy over The Beatles who left every other performer behind. Rydell’s popularity declined and it led to his contract with ABKCO Records to be ended.

It all made Rydell turn to the alcohol. “I became a total alcoholic. When I say ‘drinking,’ I used to hide bottles of vodka in my golf bag in the back of the trunk of my car, and God forbid half of a bottle was gone, I’d have to go to a liquor store and get a new one. My God, you know, I couldn’t run out of my friend,” he explained in an interview with The Morning Call.

Sadly, the death of his wife of many years and his high-school sweetheart whom he married in 1968, Camille Quattrone Ridarelli, made things even worse for Rydell. He’s drinking problem only deepened.

In 2009, he married his longtime friend Linda Hoffman who helped him overcome the addiction and encouraged him to write an autobiography. Although he quit drinking, the years of alcohol abuse took their toll and Rydell had to undergo two transplant surgeries in 2012, a kidney and a liver. In an interview with The Morning Call, Rydell spoke of his surgeries and said how his donor was a young woman named Julia. ”She was only 21 years old, she was hit by a car. And she became my donor. And not only did she save my life, but she saved seven other people, as well. It was a miracle the way things happened. It really was.”

Today, Rydell is 78 but he still performs and according to him, he’ll be doing that until his last day on Earth. ”I’m the kind of guy who’ll sing and perform until I die. It’s all I’ve ever known. I still get antsy when I haven’t hit a stage for a while. I still love what I do. When I can’t do it anymore, you might as well start shoveling the dirt on top of me,” he said some 4 years ago.

With such talent, it’s not surprising Rydell’s career has encompassed six decades and counting.

Previous Mom thinks she’s having twins: Then doctors look at the ultrasound and tell her she’s carrying sextuplets
Next Antique collector tracks down homeless man to share the profits of a rare item