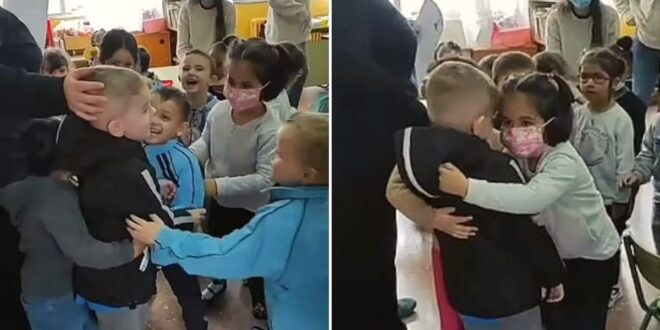 This is a touching moment a Ukrainian boy received warm hugs from his new classmates after he and his mother fled to Spain to escape the ongoing war.

The heartwarming video shows a teacher introducing a young boy who just arrived from Ukraine to her students.

The video was taken at the CEIP Peru School in Madrid and was posted online by Ukrainian diplomat Olexander Shcherba.

According to reports, the young boy arrived in Spain with his mother and 3-month-old sister to join other family members who are already living there.

His father had to stay in Ukraine to fight Russian troops.

In the video, schoolchildren can ben seen gathering around their new classmate and giving him warm hugs.

He then broke into a wide smile as his new classmates hugged him at the same time.

Parents standing around their children can be seen watching the touching moment.

Even though the young boy is yet to learn Spanish, he is already playing with his new friends, his uncle said.

One person commented: “Now that is a teacher of teachers. I often think how easily a loving person/teacher could prevent bad feelings, etc, in their class, just by encouraging kindness, right from the start.”

Another wrote: “Oh that the world could always be seen through children’s eyes, they know nothing of prejudice or hate other than what adults teach them.”

A third added: “Some so called grownups could learn a great deal, by doing and copying these marvellous kind care sharing children, These youngsters are true ambassadors for peace…. Well done and congratulations to the innocent youngsters off the world.”

What are your thoughts on this? Let us know in the comments section and SHARE this story with your friends and family!