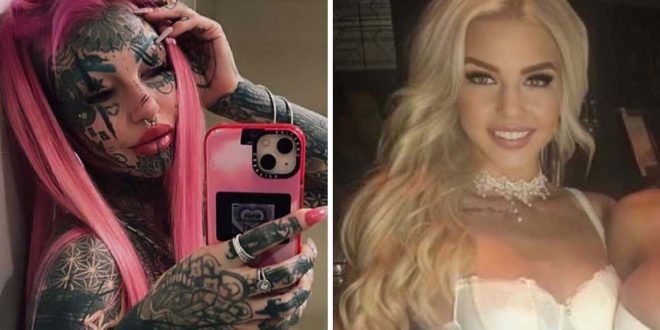 An Australian model has revealed that she cannot find a good job because 99% of her body is covered with tattoos.

Twenty-seven-year-old Amber Luke, famous for being known as the ‘Dragon Girl,’ has spent nearly $250,000 on tattoos, piercings, and several surgeries to transform her look.

According to Daily Mail, Amber claims that she faces discrimination in public and in the workplace because of her looks.

Speaking on the Brisbane radio show Robin, Terry & Kip, the young model, said that her life has become very challenging after getting 600 tattoos and several piercings.

“I am getting very heavily tattooed, but I’m not harming anyone in the process,” said Amber.

“I believe that everyone is entitled to their opinion, but I find it ‘distressing’ when people make unkind remarks about my looks in public – especially when they say I have ‘ruined’ my looks with tattoos.”

“Everyone has their own opinions of what beauty is. You see these cultures [where people] stretch their necks, their ears, their lips. But at the end of the day, we all are entitled to our opinion and that’s okay.”

“But, what gets to me is when someone expresses their opinion to me in public and comes up to me and says, “Oh, you’re ugly,” or, “You’ve ruined yourself.’”

She further added that sometimes people’s comments affect her self-confidence. Especially now, she cannot find a good job just because she is covered in tattoos.

“It’s very distressing to know that people have that strong opinion, and they can just voice it without any repercussions.”

“I’m not going to sugarcoat it, it has limited my [employment] options, but that’s okay.” She told show hosts Kip Wightman, Robin Bailey, and Terry Hansen.

“Because I see it, I don’t want to work for a company that’s shallow-minded [and can’t] look past my image.”

She also shared with the radio trio that initially, she felt empowered and resilient because of her tattoos. But after facing harsh comments and criticism from people and even her close friends, she now feels low sometimes.

“I was 16 when I got my first tattoo. It was a negative energy release. It was a milestone for me.”

Talking to Studio 10, Luke said she also admitted to getting her tongue split twice after the procedure didn’t work the first time.

“I went through excruciating pain during my procedure. The experience I went through made me extremely resilient and so strong. I have gained so much knowledge about anatomy,” she said.

“I’ve gone into shock so many times. I’ve had fits – and I’m not epileptic.”

Daily Mail also reported that ‘the OnlyFans model once injected blue ink into her eyeballs during an excruciating 40-minute procedure that left her blind for three weeks.’

In 2020 Luke shared a photo on her Instagram from the time when she was a teenager.

“I was so catatonically depressed, suicidal and was a walking dead girl. I was numb. I hated myself the majority of the time – that hatred ran deep. It tormented me.”

“Now, I’ve totally transformed myself into someone I’m proud of being. I’m a strong woman who knows exactly what she wants and who she is.”

Previous Lip Fillers This 24-Year-Old Has Spent Over $5,000 on Lip Fillers as She Guns for the “Biggest Lips” World Record
Next Months after Bruce Willis first revealed his health problems, Emma Heming Willis shares a message about her sorrow.