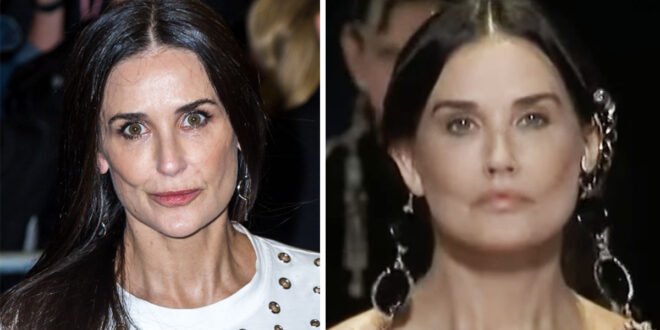 In the past, going under the knife was considered much of a great deal. Nowadays, however, getting surgical procedures for the sake of looking good and feeling better in your own skin is no longer a taboo.

The good thing, I guess, is that many influential people tend to rock more natural look in order to spread the message that we should accept ourselves the way we are, but if someone wants to look younger and do plastic surgeries, then who are we to judge?

Demi Moore has always been considered an American sweetheart. Being married and divorced three times, she is still not quitting from finding love, and honestly, at the age of 58, she looks as stunning as ever.

Moore is a mother of three beautiful daughters whom she has with her second husband, actor Bruce Willis. The two were married for 13 years. And some five years after they decided to untie the knot, Moore married Ashton Kutcher. The couple divorced in 2013.

Speaking of her relationship with Kutcher, who was 15 years her junior, Moore told The Guardian at the time: “I actually think I was at a point where I thought I was never going to find anybody.

“I don’t come with baggage, I come with trunks – and as the mother of three teenagers I wasn’t feeling sorry for myself, but dating seems kind of silly.”

The Ghost star truly is a very beautiful woman. Over the years, she answered back any time she was “accused” of going under the knife.

“It’s irritating. And it isn’t true. To fight it feels futile because I feel it perpetuates the myth,” Moore told The Guardian. “But really, the culmination for me was when there were multiple reports I had my knees done. When I read that, I thought: wow, should I have been worried about my knees?’ It’s not just my knees,” she added.

“They say I’ve had multiple face surgeries. I was in getting a facial recently and there were reports that I’d been in there for countless hours, saying I’d had surgical procedures. Am I going to sue? Do I really care?’”

In 2010, however, she admitted she had some work done. “I have had something done but it’s not on my face,” she said. “You know what? Maybe one day I’ll go under the knife. It just irritates me that people are constantly saying how much I’ve spent on plastic surgery.”

Well, her fans aren’t convinced she didn’t do plastic surgery on her face. Namely, a photo of Moore from the 2021 Paris Fashion Week, which took place earlier this year, showing the actress going down the runway during Fendi’s show caused quite a stir. As she shared with Naomi Campbell that working alongside some of the most famous names in the modeling industry was “a teenage fantasy fulfilled,” people were focused on her cheekbones.

“Have you seen Demi Moore has had more plastic surgery?” one fan wrote on Twitter, as reported by In Touch Weekly.

“It doesn’t look natural at all,” another person wrote.

“Demi Moore plastic surgery! That’s a shame! I wish women would allow themselves to age gracefully. It’s so much more attractive than when they start messing with their face.” A third one wrote, adding, “Why, Demi, why?”

Well, we can’t really say whether she had a plastic surgery or her unusual look is due to the heavy make up she wore for the show. Still, Moore remains one of the most beautiful women in Hollywood

What do you think of her new look?

When she notices a pit bull dog shivering in the cold, a woman offers her own coat!

The most painful sight is seeing your loved one fight for his/her lives. No one …