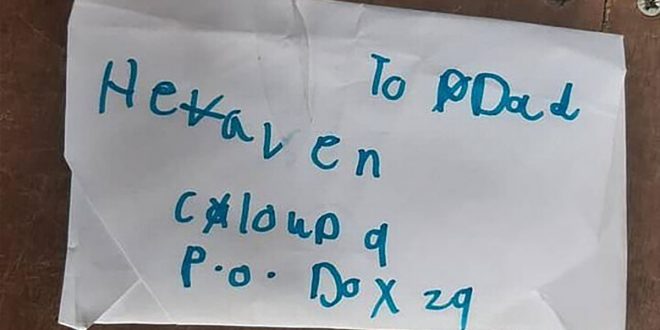 After finding a letter from a little girl addressed to her father who “was” in heaven, this mailman decided to find the girl and gift her with a special gift.

Simon, the mailman, noticed the letter in a pile in the postbox in Leicester, England, and realized that it was addressed to her dad in Heaven, Cloud 9.

Simon thought that the letter might get thrown or lost without a proper address, so he took it and prepared a special surprise for the little girl.

He asked for permission from his manager and tried to find the girl’s family.

“I’m trying to find the parents of the child as I would like to reach out to them and, with their permission, sort out a little something for the child.”

“I myself lost my dad last year, and as an adult found it hard, so I can only imagine what this child is going through. Please, if anyone has any details, then it would be hugely appreciated.”

Simon found out that the letter was addressed by a little 8-year-old girl, Sianna.

Her mom, Sarah Tully, stated that she could not believe her own eyes when she saw that Simon was looking for them. “I never thought this would happen. I’m in shock,” Sarah said, speaking for the “BBC.”

It only took 15 minutes for Simon to find and contact the family and arrange a return for the letter.

“Obviously, without a stamp or an actual address on it, if it got put in with the rest of the stuff to be delivered, it would just end up getting thrown away in transit somewhere.

“I spoke to my manager and asked if I could try to get hold of the family to find out more about it and get it back to them.”

Sarah was grateful to him for returning their letter. She also added that she will keep the letter in a special box for when Sianna gets a bit older and understands a bit more.

“Sianna just came into the room that evening and asked ‘where does Daddy live?’ so she could write the address to a letter she had written,” she added as per Leicestershire Live.

“I have no idea what is in it. I always say that’s between her and her dad.”

“I told her it was too late to post it at first, but she started crying, so I said ‘come on then,’ and we walked to the post box down the street.”

Sarah posted a picture on Facebook with her daughter and the gift that Simon sent them. “The gift Simon, the postman, brought my daughter… this has been a very touching time for us …its been overwhelming thank u to u all x,” she said in her status.