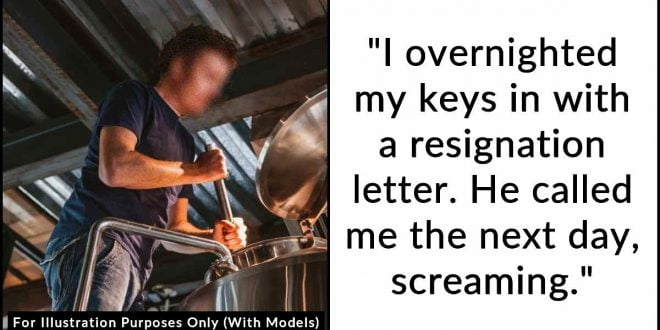 If most of you are like me, then going to work isn’t your favorite thing to do, and the office is not your favorite place to be at. But, it’s an essential thing to do in order to be able to get paid. Someone once said, “find a workplace with a great boss and fun coworkers and you’ll never have to work a day in your life!” And to be frank, I stand by that completely! The problem is that not everyone can end up with a great boss and fun coworkers, and lots of people are stuck with cruel bosses who’re yelling, offending, and punishing them.

Back in August of 2020, a man decided to share his story in the r/ProRevenge subreddit. The main character of his story was his horrible former boss who treated him really badly, so he decided to get the revenge he thought he deserved. And despite the fact that the story happened back in the 2000s, this man kept the story in his memories.

Originally, this person was a great worker and he was working day and night to provide for his family. He worked at a brewery as a brewer, and for most of the part, he found the job pretty easy and not taxing at all. Just as his vacation was ending though, his mother sadly passed away, so he had to ask his boss for a couple of days off.

The boss wasn’t happy with the poster’s request, and he thought that publicly showing his frustration with the request wasn’t enough, so he started punishing the poster. At one point, he even stopped paying his full salary. After some time, the poster had gone through enough and decided to make his boss pay for the things he was doing to the poster.

Coping with a Horrible Boss

As we mentioned above, the poster described his job in the Reddit post and said that it was pretty easy. His boss purchased old equipment before he was hired and despite the fact that this equipment was tricky to handle, he says that he managed to make it work, he also explained that he even managed to subdue the Ringwald yeast.

Firstly, the boss started by asking him to stay and do another job in order to work enough to earn his pay because of the fact that with the brewing he was only coming to work a couple of times per month. However, the poster didn’t have anything to say against that and after a whole year in the company, he got to use his first vacation.

But, he didn’t spend the days actually going on a holiday because as he says his mom was hospitalized because she had stage 4 cancer. He only spent one week of it going camping with his wife, only because his mother insisted on him doing that. Sadly, she passed away while he and his wife were on the camping trip, so she drove back home immediately!

He then informed his boss of the sad news and explained that he wouldn’t be able to go to work the next Monday.

After getting back to regularly working again, the boss decided to start asking the poster to work extra hours in order to make up for the lost hours he took to deal with his mother’s death. So, the poster decided to take a job where he was paid hourly. Everything was great, the boss wasn’t harassing him anymore until the poster got his pay and found out that his boss wasn’t paying him in full. The boss managed to scam the poster out of twenty hours of work for the first couple of weeks.

The poster wasn’t going to put up with this, so he decided to hatch a plan to ruin the boss’ business. In short, the poster didn’t brew a batch with the yeast he was meant to, and the yeast died. Once he received his last check, he left his keys alongside a resignation letter, telling his boss that he is resigning.

Nobody knew about what he had done with the yeast, and the boss was about to find out what really happened. He got out just in time, leaving his former boss, without a brewed batch, and without any yeast to use because the whole yeast was dead. The whole company started falling apart, and only after a year from the poster’s resignation the company started going under.