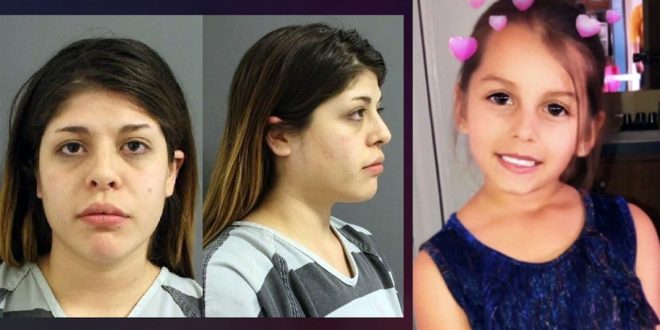 A 5-year-old girl died after drinking her mom’s meth-laced bong water. Her death was ruled an overdose, but the tragedy was made worse when it was revealed how she spent the last several hours of her life.

Sophia Larson, a 5-year-old Colorado girl, died of a methamphetamine overdose after drinking a deadly water mixture from her mother’s homemade bong on a Tuesday night. After drinking it, Sophia said it was “yucky.” It didn’t take long for her mother, 26-year-old Stephanie Alvarado, to realized what had happened. What she did next, though, makes matters even more sickening.

After losing her job at a dental office for failing a drug test, Alvarado reportedly shared meth with her cousins, 27-year-old Daniel Alvarado and 26-year-old Bertha Karina Ceballos-Romo, that very same day. They continued to use drugs while driving to pick Sophia up from school but said they stopped when she got in the car.

The meth-laced water caused the child to hallucinate, Mercury News reported. Although it was apparent Sophia was suffering the effects of methamphetamine ingestion, Alvarado and her cousins did not call for help. They were allegedly more worried about their own potential legal trouble than the child’s well-being. So, for several hours, they watched little Sophia hallucinate.

According to court documents, Sophia’s hallucinations went on for more than three hours with her telling her mom she was “seeing monsters and demons.” The family reportedly tried home remedies, giving Sophia milk and wrapping her in a blanket. Believing the girl was possessed by an evil spirit, Daniel Alvaredo and Ceballos-Romo insisted on reciting Bible passages and praying instead of going to the hospital.

Rather than pulling out of her drug-induced state, little Sophia stopped breathing, but once again, her mother would fail to get her the help she needed, allegedly fearing she would lose the little custody she had of her daughter. So, rather than rushing Sophia to the hospital, Alvarado and her cousins reportedly took the child to an unnamed family member’s home, where they knew there was an oxygen machine.

Finally, when it was apparent that giving Sophia oxygen wasn’t helping revive her, Alvarado and her cousins transported the girl to the Grand River Hospital in Rifle, Colorado, but it was too late. Sophia was declared dead. Garfield County Coroner Robert Glassmire said the child had a “very, very high” level of methamphetamine in her system and ruled her death an overdose from methamphetamine intoxication.

When police searched the home, they found baggies filled with white powder, drug residue on a dollar bill, and pipes and bongs throughout the apartment. Finally, weeks after the little girl’s demise, authorities arrested Stephanie Alvarado, Daniel Alvarado, and Bertha Karina Ceballos-Romo in connection with the death of little Sophia Larson.

The trio was charged with child abuse resulting in death, possession of a controlled substance, and reckless endangerment. Ceballos-Romo was also hit with an additional charge of tampering with evidence after police said she tried to clean up the apartment where the girl overdosed, Newsweekreported.

Sophia’s father, 23-year-old Alex Larson, said he ended his relationship with Alvarado about a year before because of her substance abuse, and he had wanted full custody of Sophia. The distraught dad — who shared custody of his daughter, having her 5 days of the week, according to KREX — said he will never forgive Alvarado or her family for his daughter’s death.

“If they would have taken her [to the hospital] when they saw my daughter drank that, she may have been a little slow and not right in the head — but my daughter would still be here with me today,” Alex tearfully explained. “The fact that I can’t hold her, I can’t tell her anything, it’s — I don’t know how to properly describe how much I miss her,” he said as tears poured down his face.

Let Sophia Larson and her father Alex be a reminder that drug use isn’t a victimless crime. Others do pay for an abuser’s addiction — and sometimes, it costs them their life or the life of those they love. Thanks to meth, three adults gambled with a little girl’s life, trying to keep themselves out of trouble, and sadly, there were no winners here. Everyone lost, including Alex and little Sophia, who paid the ultimate price.

Previous Worker Destroys Business after Boss Punishes him for Taking Time Off Because of His Mother’s Passing
Next The ultimate sacrifice: In loving memory of Jennifer Michelle Lake