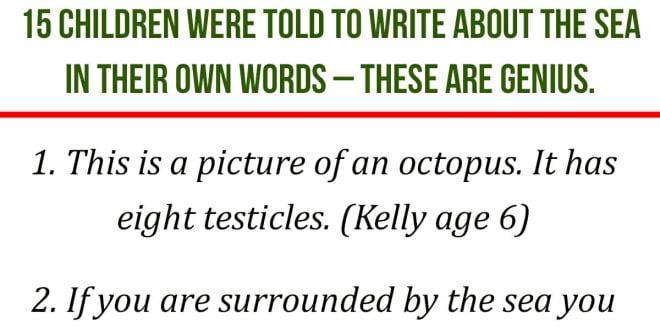 Hilarious Responses from Kids Asked to Write about the Ocean

Hilarious Responses from Kids Asked to Write about the Ocean

If you’ve ever spoken to a kid and tried to get an explanation about anything you know how funny the responses they give are.

Today, we’ll be sharing with you 15 children writing about the Ocean the way they see it. These responses prove that this bunch are little Einsteins.

Kelly, aged Six wrote: This is a drawing of octopus and these are his eight testicles!

The 6-year-old James has drawn oysters and he said that pearls are oysters’ balls.

Wayne is 7 years old and he stated something great. He said that if you find yourself surrounded by sea you’re an island. But if you don’t have sea all round you your incontinent.

Kylie, Six had to say something about sharks. She seems to hate them because they are mean and ugly. They have big teeth and are like Emily Richardson. She then continued to explain to us that she’s not his friend anymore.

Billy said that a dolphin breathes from an arsehole on the top of its head, he’s eight. Billy, not the dolphin.

Emily is only five and she said that her dad goes out in his boat and returns with crabs.

When ships had sails, they used to use trade winds to cross the ocean. Sometimes, when the wind didn’t blow, the sailors would whistle to make the wind come. My brother said they would be better off eating beans. Said 7-year-old William

Helen had something to ask about mermaids, she said:  I like mermaids. They are beautiful, and I like their shiny tails. How do mermaids get pregnant? Helen is six.

Six-year-old Amy said: I’m not going to write about the sea. My baby brother is always screaming and being sick, my Dad keeps shouting at my Mum, and my big sister has just got pregnant, so I can’t think what to write.

Christopher, seven, is afraid of fish. He said that there are dangerous fish out there. Some can sting you. Others can electrocute you. But he wonders where electric eels go to plug themselves into chargers

Kevin, six, on the other hand, had some other problems with the ocean. He said that when he goes swimming the ocean is always cold and makes his willy small.

8-year-old Becky said Divers have to be saft when they go under the water. Divers can’t go down alone, so they have to go down on each other.

Julie, seven said: On vacation, my Mom went water skiing. She fell off when she was going very fast. She says she won’t do it again because water fired right up her big fat arse.

Six-year-old Bobby was wondering how don’t fish drown in the water.

James’s dad wonders why he stopped being a sailor and married his mom.

If you, like me, found these kids hysterical, then share this with your friends and make their day beautiful!

Share
Previous Faith Hill’s youngest daughter Audrey is a spitting image of her mom
Next Kirstie Alley’s struggled with her weight over the years, but look at her now, she’s such an inspiration