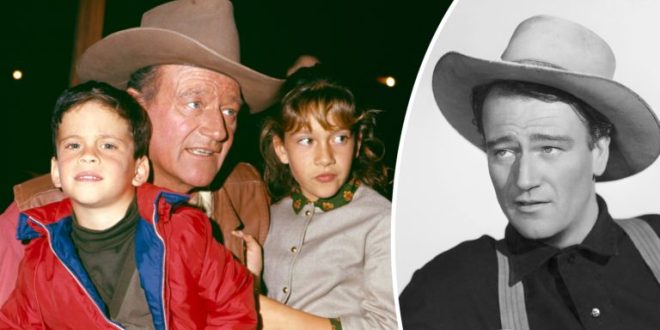 John Wayne became one of the biggest film stars in history thanks to his stellar career. The ‘True Grit’ actor began his working life in another industry entirely but ultimately grew to be the biggest movie star of his generation.

Besides starring in many films, John Wayne was also a well-known family man. He was married three times and had seven children. And while some actors’ children can recall their mom or dad not being present during their childhood, it turns out that John Wayne was one of the exceptions.

Since his tragic death, several of his kids have spoken publicly about him, revealing the truth for all to read. Here’s all you need to know about the legendary John Wayne – and the tragic ending to his life. 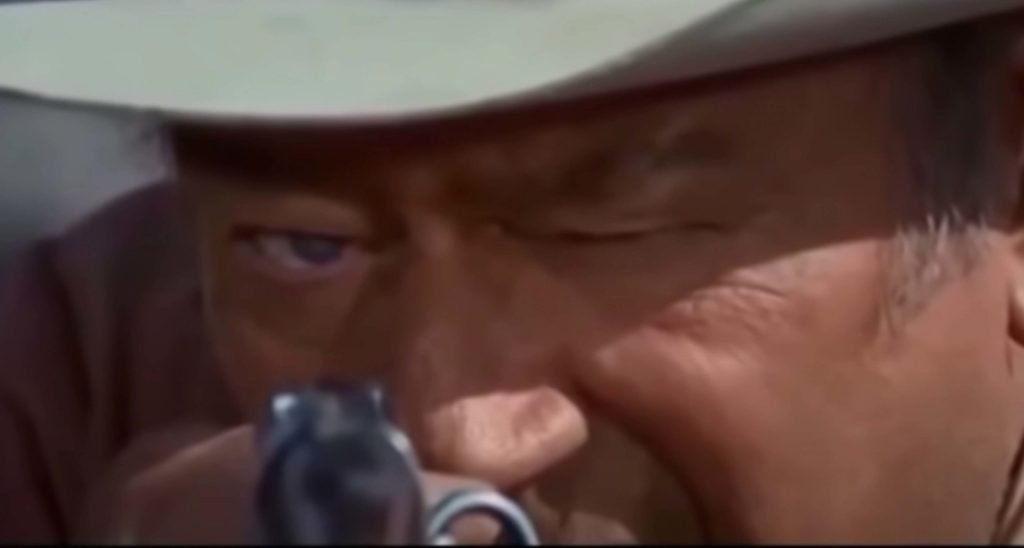 John Wayne was actually not born John Wayne. Instead, the prominent entertainer was born Marion Morrison on May 26, 1907, in Winterset, Iowa. It was at a young age that his first “name change” occurred, all thanks to the Airedale [Terrier] dog named Duke that his parents, Clyde and Mary, owned.

“There’s a picture of him in the book, he looked to weigh about 80 pounds — and Marion was Little Duke. He liked the name and for the rest of his life he always insisted that people call him Duke,” biographer Scott Eyman’s told Yahoo.

When Wayne was around nine or ten, his family decided to move to Glendale, California. His father began working there as a pharmacist, but the family faced many challenges along the way. Simply put, it turned out that making it in California wasn’t all that simple. In the end, John Wayne was given the opportunity to see many things that would shape his character and values.

For this reason alone, his time there probably helped him significantly later in life.

“You have this young boy, who has a sickly father, and they move west to the Mojave Desert to try to farm. That’s a rough place to farm, and they fail, and he has a very hard, charging mother,” Wayne’s father Ethan said when recounting his father’s upbringing.

“It’s tough on the father and he’s never satisfied. And they end up in Glendale – which, at that time, was in another small, rural environment, and the father was social, and the mother was kind of a taskmaster. And I think [John] found solace in school and relationships in school.”

John enrolled at Glendale High School, where he first found his passion for acting. Besides playing football and excelling in his classes, among other activities, he also participated in student theatrical productions. 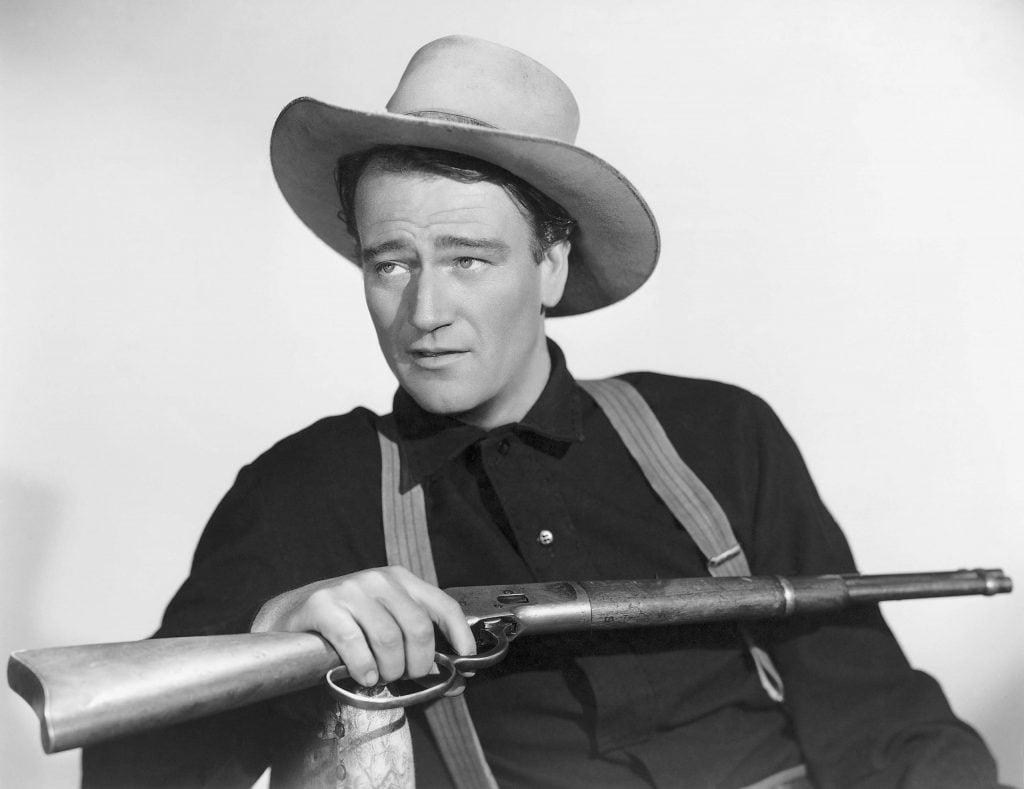 He was the school newspaper’s editor-in-chief, ran the debate team, and participated in the dance committee and drama clubs.

Wayne was also the football team’s captain, leading them to a championship season and earning a football scholarship to the University of Southern California. Initially, he was a great student, but the tuition was expensive, and in the end, he left to work instead. Of course, that wasn’t the only reason for his giving up on a college education.

No, it seemed that the young John Wayne was destined for a career in the NFL. He had the talent and the ambition, but in 1926 he was involved in a bodysurfing accident that left him injured.

So Wayne got a job at the local movie studios, employed as both a prop man and an extra in several films. It was there he came into contact with some influential people in the movie business, including John Ford, who taught him a lot.

“I was a carpenter, I was a juicer. I rigged lights, I helped build sets. Carried props. Hauled furniture. I got to know the nuts and bolts of making pictures,” Wayne said, as quoted in Scott Eyman’s biography, John Wayne: The Life and Legend.

Wayne worked with the aforementioned Ford for the first time on the set of the 1928 film Mother Machree, where he was tasked with herding geese. As he had worked some years at the studio, he had come to be known by a lot of people. One such individual was director Raoul Walsh, who gave John – at this point still known as Marion Morrison – his first gig.

Sooner after, he landed the starring role in the 1930 film The Big Trail – and it was on the set of that flick that his name would change forever. 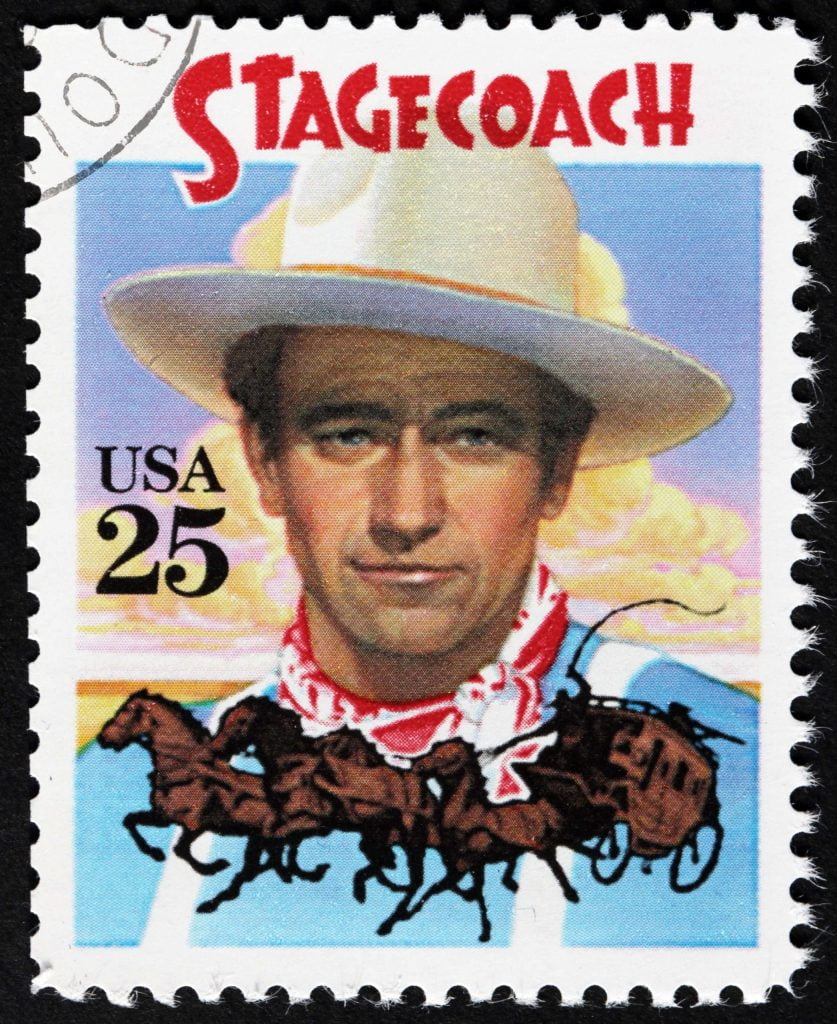 “Back then the studios didn’t like ethnic names, they wanted names that sounded kind of classical,” Eyman told Yahoo.

How John Wayne changed his name

“Winfield Sheehan, who ran Fox Studios, was a big fan of ‘Mad Anthony’ Wayne, the Revolutionary War general — that’s where the ‘Wayne’ came from, and ‘John’ just sort of came up in conversations because it seemed to fit with ‘Wayne’: ‘John Wayne.’ It had a nice symmetry to it.”

From that point, Marion – also referred to by his family as Duke – became known as John Wayne. It also marked the start of what would be one of the most legendary careers in all of film history.

What followed for Wayne was a bunch of classic movies. First, he starred in the 1939 classic Stagecoach, following it up with several more hits in the 1950s such as The Quiet Man, Rio Bravo, and later on The Man Who Shot Liberty Valance. In 1969, he appeared in True Grit.

Yet despite John Wayne quickly becoming the talk of the town, John himself didn’t see himself as a big star. Instead, he always felt that “Duke Morrison” and “John Wayne” were two completely different people – two entities living in one body.

“I’m Duke Morrison, and I never was and never will be a film personality like John Wayne. I know him well. I’m one of his closest students. I have to be. I make a living out of him.”

Many actors nowadays prepare for roles by literally trying to become the character they will play. A large part of portraying another person is centered around authenticity, and any good actor will want to know their character inside and out. 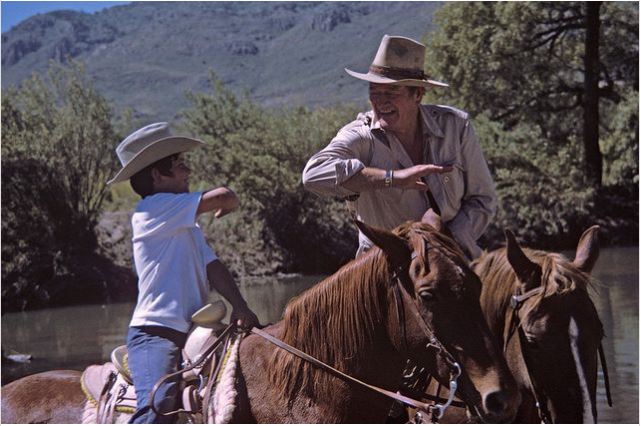 For John Wayne, this was only partially the method. According to Eyman, he insisted that people always referred to him by his childhood nickname, Duke.

“In Wayne’s own mind, he was Duke Morrison,” Eyman wrote in the autobiography. “John Wayne was to him what the Tramp was to Charlie Chaplin — a character that overlapped his own personality, but not to the point of subsuming it.”

“I’ve always been Duke, or Marion, or John Wayne,” the actor said in 1975. “It’s a name that goes well together, and it’s like one word: JohnWayne.”

Besides his successful film career, John became a husband and father. However, his personal life off-set was one of many twists and turns.

He married his first wife, Josephine Wayne, in 1933, with whom he had four children, Patrick, Mary, Michael, and Melinda. The couple split 12 years later, and just one year after that, Wayne married second-wife Esperanza Baur. Their marriage lasted for eight years.

In 1954, Wayne tied the knot for the third time. He and Peruvian actress Pilar Pallet married and had three children: Aissa, Ethan, and Marisa. They stayed married until his passing.

Of course, growing up with a father who was a major Hollywood star must have been a rather unique experience for his children. Wayne, however, never thought of himself as better than anyone else. 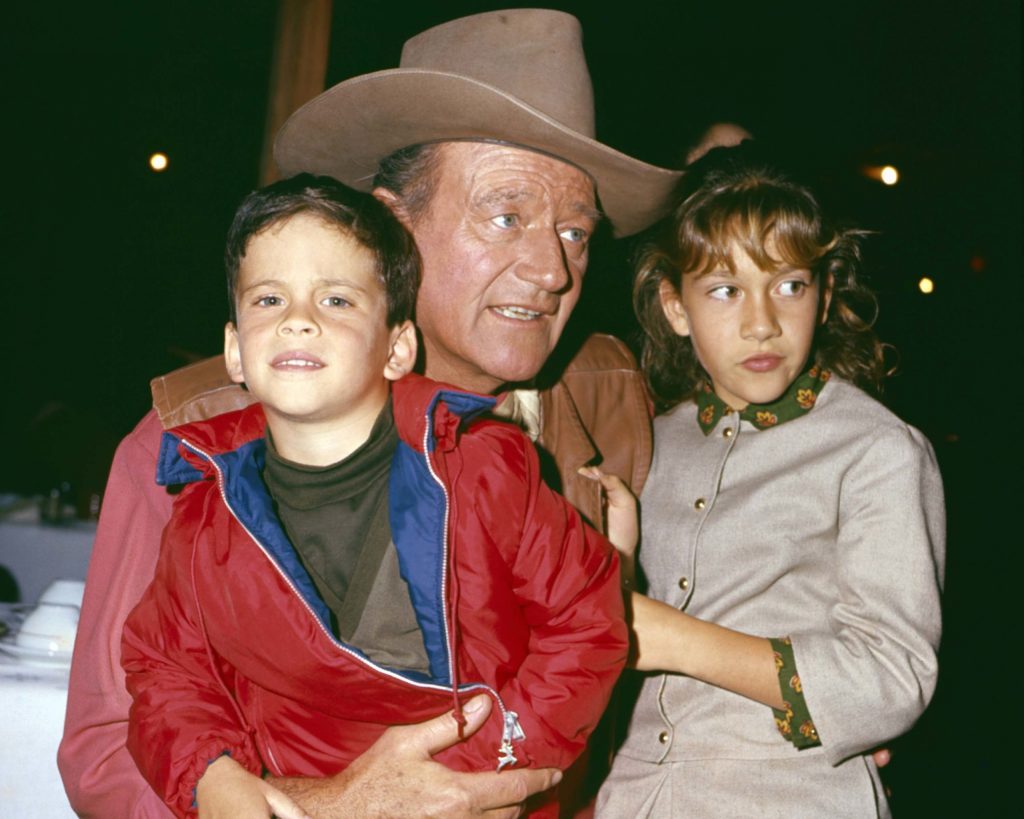 During a 2017 interview with Jeremy Roberts, Patrick, one of his youngest children, offered an insight into what his father was like.

“My dad was one of these people whose presence was show-stopping. He could walk into a room and everything would come to a standstill. By the same token, in five minutes he could just charm you into being totally relaxed and comfortable. Being charming and easygoing came naturally to him;” he said.

For Patrick, it wasn’t a big deal to his friends that his father was the one and only John Wayne.

“They knew who I was and who my dad was. My dad, in a sense, was also growing and becoming and more important,” he recalled. “More and more well known. It was happening to all of us in my close circle of friends.”

Sadly, while John Wayne was arguably at the peak of his film career, doctors gave him some terrible news.

In 1964, Wayne was diagnosed with lung cancer. He had his left lung and four ribs removed, and it seemed for a time as though there was a chance of recovery. However, the movie star didn’t stop smoking and chewing tobacco, which certainly couldn’t have helped. 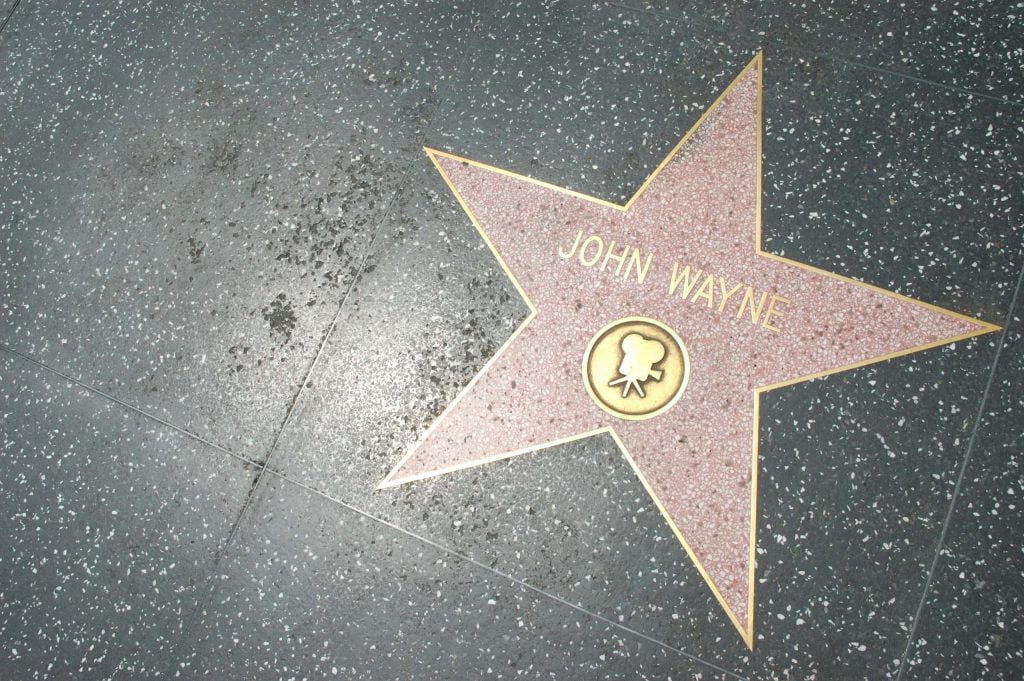 John Wayne – cause of death

In 1976, John Wayne appeared in The Shootist. It was ultimately his last film, and the actor’s health hit a rapid downward spiral in the years after its release. His daughter, Aissa, revealed that she could barely watch it.

Wayne had died several times in previous movies. For Aissa, though, The Shootist was different.

“In this film, he was dying of cancer, and that was extremely unnerving,” Aissa wrote in the book John Wayne: My Father.

“If not quite a family curse, for us the specter of cancer had never entirely faded. By the time of The Shootist, the disease had killed my Uncle Bob, and I’d lived ever since with the fear that cancer would come again for my dad. Though his cancer would not be diagnosed for two more years, when he made The Shootist I think my father had similar apprehensions.”

By 1978, John Wayne’s voice was failing him and he wasn’t able to work. He tried to hide it the best he could, but his cancer had come back. On June 11, 1979, John Wayne died, aged 79. According to History.com, his official cause of death was stomach cancer.

When the cancer was discovered, doctors concluded that the actor was too weak to begin chemotherapy and experimental treatment. 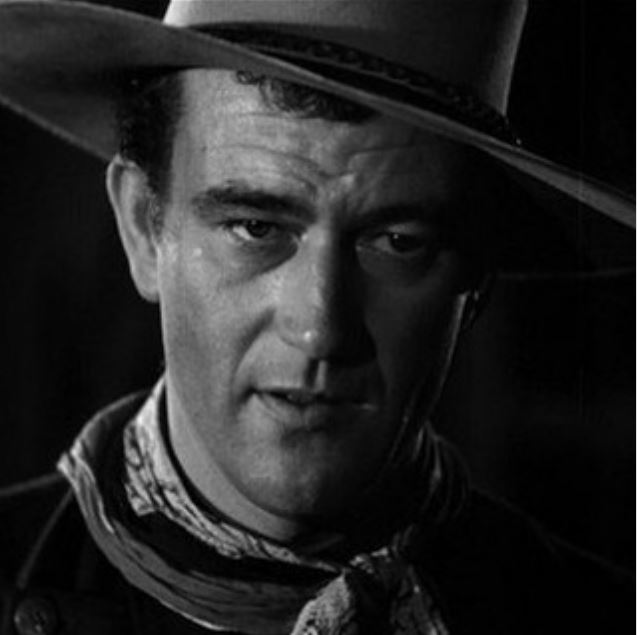 John Wayne passed away at UCLA Medical Center in Los Angeles, California. He was surrounded by family and – according to Outsider – spent his last days in and out of consciousness before passing away.

Though John Wayne is often seen as a big, bad Western figure, and a paragon of masculinity, he also had a sweet side.

His daughter, Aissa, was in his bed when Wayne passed away. When she held his father’s hand and asked him if he knew who she was, he responded with some beautiful last words.

“Of course, I know who you are. You’re my girl. I love you,” Aissa recalled her father saying.

Wayne was buried at the Pacific View Memorial Park Cemetery in Newport Beach, California. It’s located on a beautiful ocean-view hillside, though the exact spot was a secret for decades.

According to a LA Times piece, for years his grave’s location remained a mystery. Guards locked fans out of his funeral service, and his farewell ceremony remained a private affair. His grave was left unmarked for two decades.

John Wayne will never be forgotten…

FacebookTwitter
Share
Previous War veteran receives amber alert on his phone while driving, looks up and sees vehicle right in front of him
Next Fred Trump and Donald Trump hid their German origins