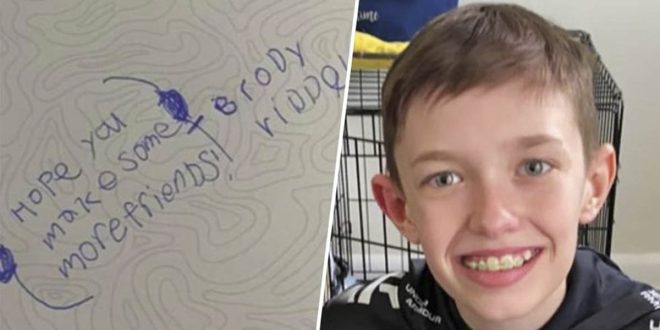 The school isn’t just a place where children gather knowledge on different subjects, but the place where they make new friends, some of which last a lifetime, and have fun.

Sadly, this isn’t the case with each child out there. Very often, it happens that certain students get bullied for one reason or another. Some of them have a hard time learning how to socialize and end up without friends as a result.

Cassandra Ridder is a mother of a 12-year-old boy named Brody. He is a fun and cheerful young man who happens to have different interests than those of his classmates. Unlike other kids his age, he’s into chess and fencing. Sadly, that is the reason why he gets teased a lot.

One day, as she picked him up from school, Cassandra asked Brody about his yearbook as the teacher informed her that the students would be bringing yearbooks home.

However, just as she mentioned the word ‘yearbook,’ Brody’s eyes got filled with tears. Not knowing what was going on, Cassandra got worried. It was then that Brody took his yearbook out of his bag and handed it to her. When she saw it, this mother’s heart shattered into a million pieces. Except for Brody’s teacher’s message and few signatures, there was nothing written on it. Brody asked from each of the classmates to write him a message, but they all said no.

There was another message as well, the one Brody wrote to himself and which said: “Hope you make some more friends – Brody Ridder.”

Cassandra knew she needed to do something about her son, so she snapped a photo of Brody’s yearbook and shared it on the Facebook group where all the parents from the school are.

“My poor son. Doesn’t seem like things are getting any better. 2 teachers and a total of 2 students wrote in his yearbook. Despite Brody asking all kinds of kids to sign it,” she wrote on the Facebook page. “So Brody took it upon himself to write to himself. My heart is shattered. Teach your kids kindness.”

The following day, Brody called him mom from school and told her to Facebook a photo he sent to her. His yearbook was now filled with lots of messages from his classmates, as well as from eight grade students and eleven grade students.

Some of the messages were: “Hey dude, you’re freaking awesome. Stay that way.”
“Brody — you are the kindest little kid. You are so loved. Don’t listen to the kids that tell you different.”
“Brody — I hope you have an amazing summer! You’re worth it and you matter!”
“Hey buddy, never change, never put your head down.”

For Brody, that was the best day ever. He was over the moon because he made many new friends.

What’s most, he’s now looking forward to the next school year.

Please SHARE this story with your family and friends on Facebook to remind them to always be kind.

Previous Pay attention to these 6 signs your body will give you one month before a heart attack!
Next In 1965, Paul Harvey’s Warning Was Broadcast — It’s Sadly Come True