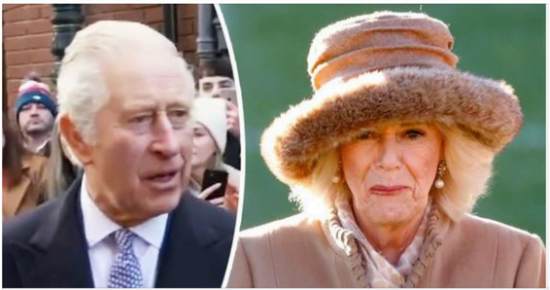 King Charles presents ‘ungracious and unkind’ side after lashing out on Camilla in public, expert claims

A new era for Britain began with the death of Queen Elizabeth II and Charles’ ascension to the throne.

Charles was only three years old when the late Queen was crowned, and he had no idea that the ceremony he had just seen would pave the way for him to one day become King.

Charles has a lot on his plate now that he is the King of England, and Camilla, who will soon be proclaimed Queen Consort, will have a lot on her plate as well.

More than 8,000 people attended the coronation of his mother in 1954, and 129 official nations were represented. According to reports, King Charles will considerably lower that number at his coronation, which is scheduled for next year.

The Palace has confirmed May 6, 2023, to be the date when King Charles’ becomes King of Britain. The coronation, which is given the code-name “Operation Golden Orb,” is set to take place in Westminster Abbey.

The statement regarding this special event Britain hasn’t seen since June 2, 1953, when Queen Elizabeth became the head of monarchy, states that King Charles’ coronation “will reflect the monarch’s role today and look towards the future, while being rooted in longstanding traditions and pageantry.”

Further, the statement reads that “The Coronation is a solemn religious service, together with an occasion for celebration and pageantry.”

It was reported that the initial date of the ceremony was planned to be June 3, a day after what would have marked the 70th anniversary of Queen Elizabeth’s coronation, but May 6 is as significant, at least for the Sussexes, who celebrate Archie’s birthday on that day.

When it comes to Harry and Meghan, no one knows with certainty whether they will attend the coronation. The rift between them and the royals seems to be getting deeper since the release of their Netflix documentary and the upcoming memoir by Prince Harry titled Spare.

The trailer for the much anticipated documentary featured Meghan Markle and Prince Harry caused quite a stir. At the very beginning, Harry could be heard saying, “No one sees what is happening behind closed doors. I had to do everything I could to protect my family,” while Meghan, who was showed wiping tears at one particular moment, says, “When the stakes are this high, doesn’t it make more sense to hear our story from us?”

Now that the episodes aired, the members of the Firm haven’t issued any comments but royal insiders claim they are not happy.

One person that is believed to be doing everything in their power to smooth things down is Camilla.

Last week, she and the King took a visit of the Welsh town of Wrexham. They greeted the public in the city center, and then Charles felt like it was time to go but Camilla was still preoccupied talking to someone else further down the street. Charles apparently got frustrated and asked from his aids to tell Camilla to hurry up.

“Can we try and get her back again? Please, we need to go. I was trying to wait for her, but she goes on,” King Charles said, obviously perturbed.

She believes that Charles not only showed off his temper, but also his disloyalty towards his wife.

“There are no signs of good humour here, just a man pleading to his entourage to get him out of his situation and on to his next booking,” she said.

“I know people are creating empathetic links by saying this is a common theme between husbands and wives and that it makes Charles seem more human, but his wife is the new Queen and he is making a very public scene about her that lowers her status.”

She then went on to add, “It might be understandable that Charles is under a lot of pressure recently, but his mother provided the perfect role model when it came to carrying on with the job without complaining or showing any signs of disloyalty to her nearest and dearest. To speak of his key supporter and fan in this way is ungracious and unkind.”

“Charles really should have popped back to speak to her in person rather than sounding irritated to other people, or maybe grinned fondly to register ongoing affection,” James said.