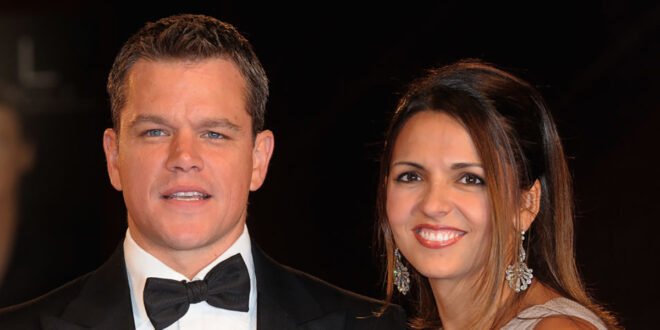 Handsome, extremely successful, and very much grounded, Matt Damon is loved by many. Despite his celeb status, he lives quite a private life with wife Luciana Damon.

Ever since he first appeared on TV, Damon captured the hearts of millions. With a number of awards under his belt, including an Oscar for Best Screenplay for the movie Good Will Hunting, Damon has been part of some great projects over the years. Some of the films he played in, among the rest, are Saving Private Ryan, The Talented Mr. Ripley, The Departed, Ocean’s trilogy, The Martian. He is one of the highest-grossing actors of all time.

Besides being a huge name in Hollywood, Damon is at the same time a family man and a devoted husband and father.

Some 17 years ago, he met his wife and love of his life. Their encounter was a serendipitous one.

Speaking to Ellen DeGeneres, the actor said: “I’m so happy now; I’m so lucky. I hit the jackpot with my wife.”

During the filming of Stuck on You in Miami, Damon was “dragged” to a bar by his friends. He wasn’t willing to go but agreed eventually and that turned to be the best decision of his life.

“We were supposed to shoot in Hawaii, then the movie got moved to Miami. I’d never really hung out in Miami, then one night in the middle of the shoot a couple of the guys said they were going to get a beer somewhere and I said ‘I’m not really interested’ but they dragged me along and we ended up in a bar where my wife was a bartender and I literally saw her across a crowded room,” he explained.

In a rare interview with Vogue Magazine, Luciana also recalled the first time she and Matt Damon met.

“But he had started getting recognized and asked for pictures and autographs,” she started her story.

“And then it got kind of aggressive because people are drinking and stuff, and so he came and hid behind my bar … [wanting to] just hang out back there and have a drink. He says ‘oh I saw you and I really wanted to talk to you’.”

“So I put him to work with me! I said: ‘you know, if you’re going to be back here, you can’t just be standing there!’ He had trained as a bartender for a film years before, so he started making drinks. And he made me a ton of money in tips that night, because of course everyone wanted to go and see him. So it turned into a really fun night.”

They tied the knot in 2005 in a private civil ceremony at the Manhattan Marriage Bureau.

At the time they met, Luciana was already a mom to daughter Alexia whom she had from a previous relationship. She and Damon have three daughters together, Isabelle, Gia, and Stella.

Although he is quite busy filming, his family always comes first. Damon revealed that the longest he’s been separated from his wife and daughters was three weeks, and they have this two-week rule where they try not to be apart for more than that. In case a project requires more time, he takes the family with him.

“Every decision to make a movie is really up for to the family. If it is going to be too disruptive, I just can’t do it,” he said, as per the Daily Mail. “Sometimes it is an adventure. Last year I went to China for six months and it was a big family trip and that was awesome.”

He believes that he’s not a hot topic for magazines because he’s just a middle-aged married guy with four kids. “So as long as that narrative doesn’t change too much, there’s no appetite for it. If I’m not jumping up and down on a bar, or lighting something on fire, or cheating on my wife, there’s not really any story to tell,” he told Esquire.

Matt Damon is perfect in every way.