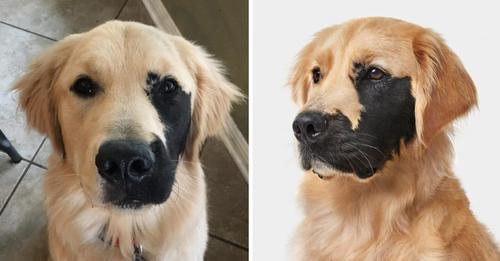 What makes Enzo the golden retriever special in comparison to the other golden retrievers is his extraordinary birthmark. Enzo is a cute little cuddly and adorable doggo who was lucky enough to find his forever home when he was just 2 years old. He can also be described as friendly. Enzo suffers from a rare genetic mutation that accentuates his presence and makes him stand out from the rest of the dogs.

This genetic mutation has caused a huge black splotch around the area of his left eye. Even though purebred golden retrievers usually possess a single bright golden coat, this purebred has a birthmark that covers the left side of his face. There is no doubt as to the fact that this birthmark adds to his beauty. Golden retrievers are generally born with a base black coat. It is the modifier gene in their body that gives them the golden color.

Almost all golden retrievers have this modifier gene. But in Enzo’s case, he had a slight stumble in his DNA that erased the modifier gene on the left eye area of his face. This rare condition is known as pigmented somatic cell mutation. Nevertheless, this birthmark has made Enzo popular all over the world. He is an Instagram celebrity with more than 100kK followers. Even though Enzo has no idea how unique he is, he continues to live as any ordinary golden retriever would.

People are in love with this adorable dog and his interesting birthmark. Meanwhile, Enzo is on a mission to make friends wherever he goes. At times people confuse his breed and assume that he is a mutt because golden retrievers are solid-colored. Another extraordinary fact about this doggo is that he is extremely big for his age. You can follow him on Instagram under the username mister.enzoviola to enjoy more pictures of this lovable soul.

Previous Little Girl Finds A Secret Room In Her House That Leads Into An Even Wilder Surprise
Next AN 11-YEAR-OLD WHO HAS BEEN ABANDONED BY BOTH HIS BIRTH PARENTS AND HIS ADOPTIVE FAMILY COMES ACROSS A SINGLE FATHER WHO IS INTERESTED IN ADOPTING HIM.