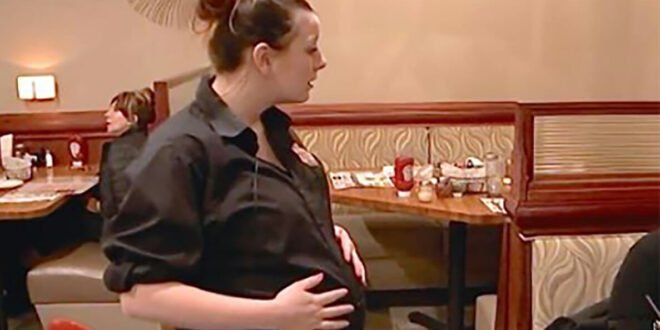 When first time mommy Courtney English, 23, was in the eighth month of pregnancy, she was doing her best to earn enough money for the big arrival. So, no matter her condition, she still worked her usual job as a waitress at the Lamp Post Diner in New Jersey.

This lovely lady always welcomes the customers with a smile and all her regulars knew just how excited she was for becoming a mother to her bundle of joy. That day, however, a new face stopped by at the restaurant, and his act of kindness touched this mother-to-be to the core and left her in tears.

As the local Voorhees County police officer entered the place on a busy Friday, the first thing he noticed was that the woman who served him was pregnant. He though she didn’t have it easy standing on her feet during the long shifts. The two engaged in a casual chat and after finishing his meal, the officer asked for the check.

What he did next quickly went viral all for the right reasons. His bill came to $8.75, but the tip he left was way bigger. Besides giving Courtney a generous tip of $100, he also wrote a message on it, and now everyone who has seen it is deeply touched by the officer’s action.

The message said, “Enjoy ur 1st. You will never forget it.”

“It was from the heart. It really touched her,” dad Brian said. “There have been plenty of situations where she got a nice tip, but just the little remark was what got her.”

Courtney’s reaction was very sweet. She just couldn’t believe someone could be so kind and generous, so she rushed to her boss with tears of joy in her eyes.

It was her father who though his daughter’s story was worth sharing it with the whole nation. Needless to say, everyone is praising the officer who wanted to remain anonymous.
Previous The life and death of Mob Wives star ”Big Ang”: She left her husband while battling cancer
Next 21-year-old girl is raising her 5 siblings on her own after both their parents die of cancer