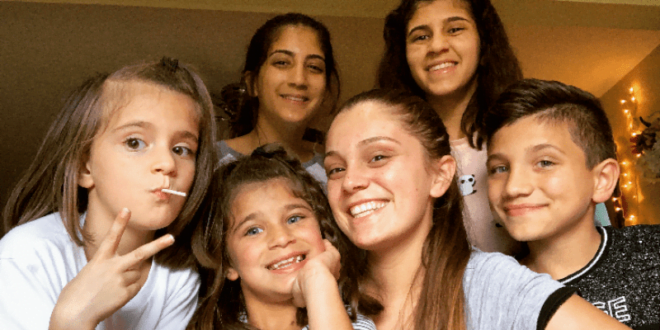 Life is unpredictable. We never really know what the future holds for each and every one of us and we usually take things for granted. Today we have it all, and in the next moment, we can find ourselves crashed from the situations and obstacles that suddenly came our way.

The Rodriguez family from Orlando, Florida was a happy one. But then, the mother of six, Lisa Smith, died of cervical cancer in 2013. It was then up to her husband, Alexander Rodriguez, to take care of the family. He gave his wife the word that he would always be there for their kids, but he couldn’t keep the promise, as he died of lymphoma just three years later.

All of a sudden, the six siblings were left all alone and only had each other. That’s when the oldest of them, Samantha, took the role of both a mom and dad.

Meet Samantha Rodriguez, the Florida 21-year-old who stepped up to raise her five siblings after both their parents died. https://t.co/4ndMjVMS8j

Samantha’s story is touching. She recently shared it with The View and spoke of the life after the loss of their parents.

“My reality [was] I’m 17 but these are my brothers and sisters, and when I looked at them, I knew that they’re children,” she said. “They’re vulnerable and they need an adult, so I became their adult.”

If she hadn’t done it, her brothers and sisters could easily end up in the foster care system. At the same time, it would mean that her dad’s promise to her mom would be broken, and she could never let something like that happen.

“I knew what I had to do,” Samantha told CNN, and added, “I learned so much from my mom. I was like her sidekick so I learned what it meant to raise a family. When we lost her, I knew that I wanted to be just like her in every way. That’s what I wanted to do for the kids.”

The Rodriguez kids lost both parents to cancer in recent years. Samantha, 20, has taken on the role of caregiver to her five younger siblings. The kids thought they were visiting the OCSO Aviation Unit for a tour. Instead, they received a Christmas none of us will ever forget! pic.twitter.com/1Bs4w6PQob

Today, 21 year old Samantha is attending college and is working as a waitress in order to be able to provide for the family. All of her siblings, Destiny, 7, Bella, 9, Michael, 12, Brenda, 15, and Milagros, 16, go to school regularly and have food and clothes all thanks to their brave sister.

Speaking of her decision to go back to school, Samantha told The View that in case she didn’t do it, she couldn’t explain it to her siblings how important it is for them to be great students and to graduate.

“When I [graduated] the kids were very proud of me and they came to my graduation and it was amazing. I didn’t know people who graduated high school or went college, and I didn’t have that direction so it was hard for me,” Samantha said. “When I realized that I wanted the kids to finish and that I wanted them to be successful, I was like I need to give them that example and show them.”

21-year-old Samantha Rodriguez opened up to the co-hosts about taking on the roles of mom and dad to her five siblings after both parents died from cancer. https://t.co/Xyvw8TSDUx

Whoopi Goldberg asked the young girl what is that she cherishes the most in life which her parents taught her, to what she answered, “They showed us not to take anything for granted. That’s something I try to teach the kids. At the end of the day, the material things don’t matter. What’s given can be taken away so fast. The only thing that really matters is family and love and support.”

He brothers and sisters are aware that Samantha had to give up her life in order to take care of them and are very thankful for that. She on the other hand says being there for her siblings is what makes her truly happy.

We hope this incredible family will have all their dreams come true because they deserve only the best in life.

Take a look at the siblings being guests at The View and the surprise they got in the video below.

Share
Previous Pregnant waitress serves cop then finds a note from him on the check
Next Sad news of the day! Unfortunately, Queen Elizabeth II

Former President Jimmy Carter lives in a house worth $210,000 and shops at the local Dollar Genera

Helen Mirren and Taylor Hackford talked about the death of their stepson Rio Hackford. Rio …