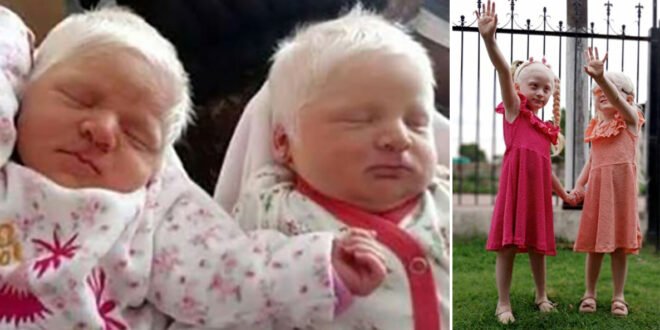 All children are born unique – but it is inevitable that some births go down in history and leave an everlasting imprint on our minds.

When twin girls Catalina and Virginia were born in 2018 in Argentina, it became news worldwide. The reason? The girls were born with very eye-catching snow-white hair.

The pictures of the beautiful and unique twins went viral four years ago – but then people kind of forgot about them.

However, the girls’ relatives recently posted some pictures of Catalina and Virginia, and I must say that these girls are still just as adorable!

Back in 2018, Jorge Gomez and his wife were overjoyed as they prepared to welcome twin girls to the world. The couple, who already had a beautiful son, felt like their family was about to be complete.

At the beginning of her pregnancy, Mrs. Gomez made regular visits to the doctor. After one visit, she received the news that she was expecting twins, and that was, of course, big news.

”When they gave us the news that we would have two babies, it gave us a lot of happiness and when they were born and we saw that they were albinos, that happiness did not change at all. For us it is a blessing,” Jorge told a local newspaper.

He and his wife did everything to prepare themselves for welcoming the twins, and everything went as planned with the pregnancy.

Carrying twins can put them mom and her babies at increased risk for complications, but twin girls Catalina and Virginia were born healthy.

The twins were prematurely born at 36 weeks, but both weighed a healthy weight, and the mother was doing just fine.

Instead, something else grabbed the doctor’s attention at the hospital in the Tucuman Province, Argentina. Mrs. Gomez had just given birth to two girls so rare they became an overnight sensation.

When doctors first laid eyes on the babies, they couldn’t hide their surprise and were left speechless. Catalina and Virginia arrived with heads covered in milky white hair – they didn’t resemble anyone in their family.

The little girls were born with albinism, a rare genetic disorder that causes a lack of pigmentation in the skin. For example, only one in 17,000 babies is born with albinism in the U.S. Albinism is passed down (inherited) through families, and for most types, both parents must carry an albinism gene.

When Catalina and Virginia were born, they became the first set of albino twins born in Argentina.

Their rare genetic disorder came as a shock for everyone. But Jorge and his wife also felt blessed with their new additions.

“When they gave us the news that we would have two babies, it gave us a lot of happiness and when they were born and we saw that they were albinos, that happiness did not change at all,” dad Jorge told LV12.

However, some safety measures have been required during the twins’ upbringing. For example, the girls are extremely sensitive to UV rays, which affects a family with young children.

This year, Catalina and Virginia turn four years old, and as they are growing up, they are getting more beautiful every day.

In December 2021, the girls posed as models when a person close to the family had made some dresses.

Hopefully, their story and these pictures will shed some light on albinism and show how uniquely beautiful albino people can be.

The will girls will grow up so different, but Jorge and his wife are determined to show the world that all babies deserve unconditional love and love without judgment.

And whatever ups and downs life throws at them, the girls will always have each other.

I wish these little sweethearts all the very best may they keep inspiring the world in every positive way possible!