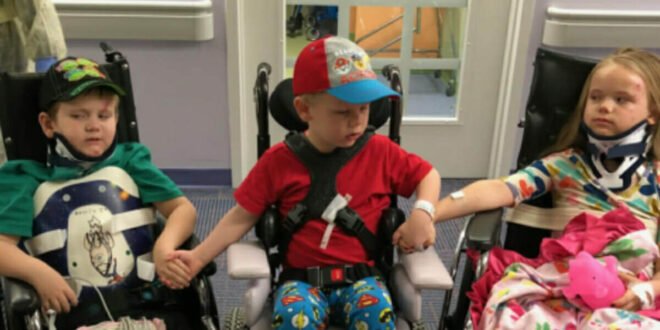 Back in April, 2018, the life of one family changed forever. As the Clemens were driving home from vacation, about a half-mile south of Sterling City, one Chevrolet Tahoe driver lost control of her vehicle and crushed into the family’s Chevrolet Suburban. Unfortunately, Jim Alan Clemens, 31, his wife Karisa Brianne Clemens, 29, and their 2-month-old daughter Juliana lost their lives, and the rest of the children, Angela, 8, Zachary, 5, Wyatt, 4, Nicholas, 2, were left fighting for their lives.

They all suffered serious injuries. Angela was in a coma due to severe brain damage, but she was able to wake up. Now, she started school again and is able to read and sing. However, no one is certain if the injuries will affect her life in the future.

Zachary broke his back. After numerous surgeries he can now walk and run again, although he has to wear a vast.

Little Wyatt suffered multiple strokes and was paralyzed on his left side, but managed to recuperate.

After Angela woke up from coma, she and Zachary held hands, and that image was so impactful that people said it spread hope.

The kids’ great aunt, Teresa Burrell, was the one to share the photo. She was also the one who set fundraiser for the orphaned children who needed finances, love, and prayers more than ever before.

“All 3 kids that are receiving medical care at Cook Children’s are now on the same rehab floor and were finally reunited a few days ago! Wyatt is doing so well. He suffered paralysis on his left side, but through PT has regained strength and movement. He can walk with a spotter, and they are having a hard time convincing him he shouldn’t be running! He is a great comfort and support to his older siblings,” Burrell wrote on Facebook.

“Zach is struggling. He has had trouble eating and they have given him a feeding tube to make sure he is receiving adequate nutrition. He is also fighting off infection, and as a result has had a high fever for the past few days. He is in a lot of pain – both physical and emotional – and is our greatest concern at this point.

“Angela continues to improve. She is talking more and more each day and is able to read fluently for short stints at a time. She took her first wheelchair ride outside yesterday to check the weather and was glad to be in the sunshine. They are still working on managing her pain as her legs are healing from severe injuries.

“As can be expected, all 3 children — especially Zach and Angela — are struggling with grief as they are coming to accept the loss of their parents and baby sister.”

The entire community gathered together to show these children they are not alone. We truly hope their future is bright.