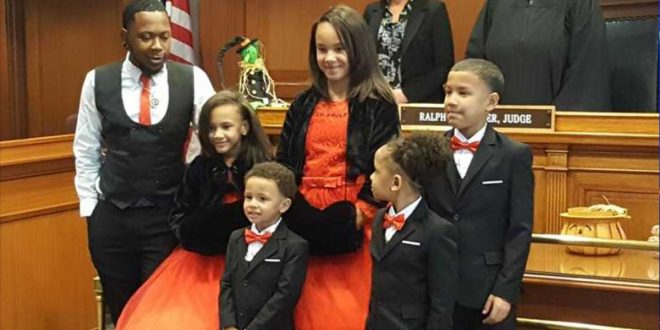 A foster dad adopted five siblings to stop them from being separated from each other as they were being adopted one by one.

As reports say, Mrionna, Robert, Kiontae, Makayla, and Giovanni were adopted by Robert Carter on Friday.

Being split himself from his siblings when he was 12 years old in Hamilton County, Ohio. Robert stated that he didn’t want to leave the kids being split up like him and his younger siblings, so he adopted all five!

The “Telegraph” reports that Robert Carter eventually got custody for his younger sister and received guardianship of his young brother.

He also stated that he has felt what the five siblings felt when he adopted them.

“I understand what they went through, so it really touched me. I was already thinking about adopting all of the kids, but when I saw them crying, I was like, ‘Ok, I’m going to take all five to keep them together.’”

Robert decided to take all five of the kids when he and the three boys went to see a woman fostering the two girls. That was their first meeting in more than half a year.

"I’m their dad for the rest of their life, and they know that they’ll never have to go through what they went through again.” Robert Carter is now a father of five.
https://t.co/3H5zkGaKEU

“When permanent custody was awarded to JFS, the five siblings were already placed in three different foster homes.

“Mr. Carter was the only foster parent willing and able to adopt all of the children. His childhood background has made him aware of the importance of keeping siblings together. He says that he enjoys being their father and that parenting them is easier than he could have ever imagined! His life is busy, with a lot of love, laughter and loudness! I have enjoyed working with him and witnessing the children bond as siblings.” Stated Stacey Barton, an adoption worker.

Robert believes that being a sufferer of the same fate and taking care of his siblings led him to do what he did.

“Making memories to replace a lot of the bad ones,”

“Every night, I talk to them and let them know, ‘I’m your dad forever. I know what it’s like, and I’m always here for you.’ Like Marionna. She’s warmed up so much since the beginning. At first, she didn’t like me.

“She walked in my room last night and said, ‘I just want to say thanks for taking us in and taking care of us when our real mom couldn’t.’ It just really touched me. So just making memories, letting them know I’m here and they never have to go. I’m here for them no matter what.” Robert said.

I can’t even imagine how Robert and all of the adopted children feel right now when they know that they won’t be separated, but each and every one of them will grow together in a home where they have a guardian who will take care of them!

It’s hard to say this, but these five children were the lucky exclusions out of the really common truth. Let’s hope that there are more people like Robert on the face of the earth and that more kids will end up adopted together instead of being separated.