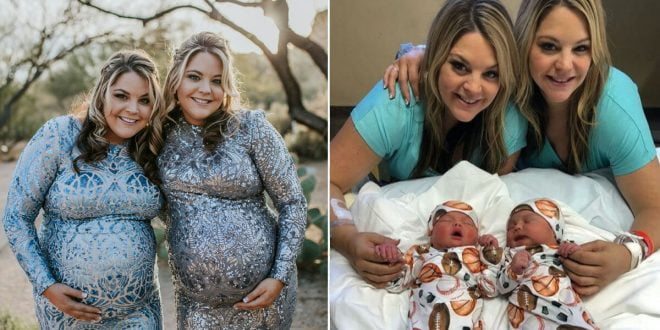 Identical twins had plans for their future. But faith had something else stored for them!

If I’ve learned anything about identical twins it’s the fact that there is some kind of a special bond between them. And the identical twins we’re about to talk about, Jalynne and Janelle, are the perfect example of this theory. Just like with most twins, these two have been together and inseparable from their birth, and they’ve always done everything by each other’s side. So, this is what they did when they were giving birth as well. They gave birth to their babies on the same day!

In an interview with “Love What Matters” Jalynne said:

“Being a twin is unlike anything you can explain or understand unless you are one yourself. The bond is so strong that one can feel what the other feels, and vice versa. Growing up we were inseparable. We dressed alike every day, shared a car and cell phone, had the same friends…we were glued to each other’s hip,”

“Teachers would recommend to our parents we be in separate classes, and we would cry at the thought of being away from one another. Our mom did not have the heart to break that bond between us, and we were so thankful she kept us in the same classes. That lasted until freshman year of high school. Teachers worried we would not be our true selves by always being in the same classroom, but we think it benefitted our personalities and we always had straight A’s.”

The two have practically always been inseparable. And they even invented their own language that only the two of them knew and no one else could understand. Jalynne and Janelle even thought about their future dreaming about having two neighboring houses with their children growing up together and even attending the same school.

The only thing they didn’t manage to do, was basically out of their hands, Jalynne said yes before Janelle, but her sister followed suit one and a half years later. The two planned to build their families together, so they fell pregnant 2 weeks apart from each other.

This didn’t go as planned for them. Because of the fact that Janelle lost her baby. Shortly after, the doctors discovered some health issues with Janelle and discovered that it would be pretty hard for her to conceive again. Janelle discovered that she had an ectopic pregnancy and polycystic ovarian syndrome. But, Jalynne also went through two miscarriages.

The two sisters didn’t let the setbacks drive them away from their goals. Instead, they got even closer (if that’s even possible). Six months after the gruesome events, Jalynne got pregnant one more time. She was scared to reveal the big news to her sister fearing of her reaction.

Four days after finding out she’s pregnant, Jalynne got a call from her sister. Janelle was pregnant too!

The twins were crying tears of joy, sobbing and laughing, realizing that their plans were back in action. They even cracked some jokes about having the babies on the same day.

As time passed by, the doctors were amazed by the similarities they were seeing at the routine checks. Both babies were developing quite similarly.

The sisters decided to give birth via a cesarean.

Finally, their big childhood dream was becoming a reality!

They both had boys and after a difficult turn of events for both of them, they were finally happy!

Previous An Old Man And A Young Boy Struggle With The Moral Issues Of Riding A Donkey
Next Meghan Markle is not the only Actress to Marry a Prince!