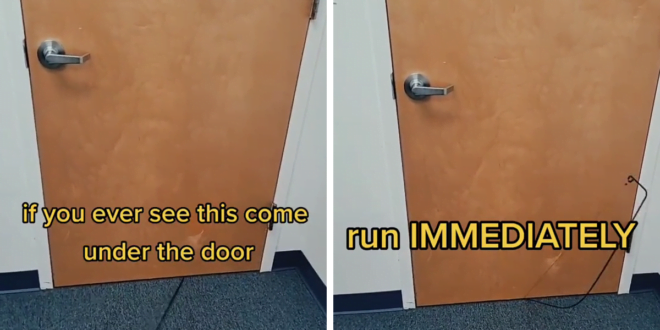 Four days ago, a woman from Canada, Josie Bowers, published a TikTok, recalling the moment when a tip from her police officer stepdad potentially saved her life.

In the video which has already amassed over 10 million views, Bowers described an attempted invasion into her hotel room when she was just a teenager.

At the time, she was on holiday with her family in Ocean City, Maryland, USA, when a man used a contraption to open the hotel door from the outside. Josie – who was 15  – was all alone in the room when the intruder slipped the device under the bottom of the door and used it to pull down the handle from the outside.

After she relived the “scariest experience” of her life in a series of videos on TikTok, her account quickly went viral.

The 19-year-old said that she “was staying in Ocean City, at the Hilton, right there on the waterfront, and I went to go shower as the rest of my family was down at the beach. I was by myself.”

“My main thought was holy s*** I’m in a towel right now and someone is about to break in and get me. So the door opens a crack, and I just slammed it back shut and put the deadbolt on.”

The man then told her he was there to fix the door – but Josie had her suspicions. “So they tell me your keycard is broken and we need to get into the room and fix your keypad for you,” she continued. “And so I open the door a tad bit, to see if it was a worker. It clearly wasn’t, they were in jeans and a T-shirt. Hilton keeps it pretty classy, not the attire.”

But even in the heat of the moment, Josie remembered a tip she got from her police officer stepdad.

“So I think I’m very smart for this one, my stepdad is a police officer, he taught me never to let people know you’re alone.”

“I yelled ‘Hey dad, there’s someone here to fix the door.’ As soon as they thought that I wasn’t alone – and potentially my dad was there – they ran, they were gone.”

Josie told the story in hope that her experience will alert others to the danger, encouraging them to stay safe.

“I’m glad I had this experience so I can teach people about it. Obviously, I’m safe but it could have ended up a lot worse,” she said. “Be safe, you can get door stoppers, always put on the deadbolt.” Journalist Mark Ellwood, who has lived out of a suitcase for most of his life, pointed out that the lack of reliable data makes the topic of hotel theft “a murky one.”

Whether it’s a one- or five-star spot, hotels prefer to discourage guests from turning incidents into a statistic. “Nine times out of ten, people who have an incident [in a hotel] don’t go to the police,” criminologist Bob Arno, who specializes in travel safety, told Ellwood. Companies treat their properties as mini-republics and are not willing to make any internal figures public.

Paul Frederick, the former vice president of global security for Starwood, who now runs his own firm, added that in his experience, 90 percent of theft is in public areas, and just 10 percent occurs in rooms.

However, no matter the percentage, it’s the room-related crime that feels violating the most—an unwelcome stranger,  in a supposedly safe space, going through your personal stuff. Previous “I’m Your Dad Now, Don’t Worry You’ll Be Together” Said Robert and Adopted 5 Siblings
Next Fans Heartbroken by Final Picture of Betty White Before Her Death