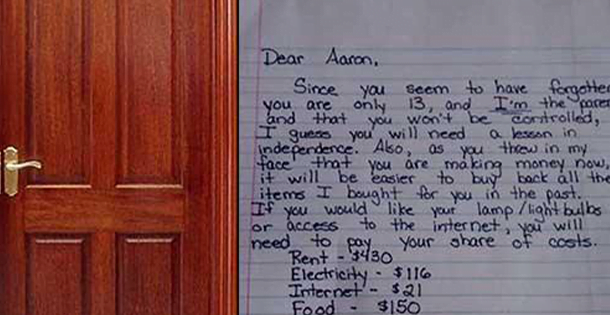 A mother named Heidi Johnson wrote a letter for her rebellious son that is still being shared around the internet by its thousands of users.

Six years ago, Heidi noticed some rebellious behaviors by her son Aron. One time she caught him lying to her. When Heidi asked if he had done his homework he replied yes when the truth was that he hadn’t.

Aron had started a youtube channel and was feeling more independent as he was making a few bucks. But still, he was only 13 years old back then.

When Heidi asked him to be honest and behave like a good child, Aron on the other hand said he had a job now and that it was more important than school.

Heidi knew she had to do something. So, she wrote him a letter and shared it on her Facebook page. In her letter, Heidi pointed out that since Aron was behaving like he was a roommate and not a son, she should also pay his share of costs and do some chores around the house.

Some of the costs included: rent for $430, electricity for $116, internet for $21, and food for $150. Aron also had to take out the trash and sweep and vacuum 3 times a week. He had to clean the bathroom once a week, and clean up after himself.

If he failed to do the chores and prepare meals for himself Heidi would charge him $30 per day.

Heidi posted the note on Facebook and left it public by mistake. Overnight she had 100 friend requests and people all over the world had shared the post. In three weeks it got shared over 160.000 times and had received over 100.000 likes and 15.000 comments.

There were a lot of people who supported her parenting technique and of course, others who did not but Heidi was smart enough to not take them seriously.

However, the important thing is that the letter served its purpose, and the relationship between Heidi and her son was reestablished.

Today the post keeps getting a lot of attention and people keep sharing it with each other.

What do you think of this parenting technique? Share your thoughts with us in the comments section on Facebook.

Previous Pay attention to these 6 signs your body will give you one month before a heart attack
Next Alejandra, Richard Gere’s Wife, Shares New Details About Their Private Life