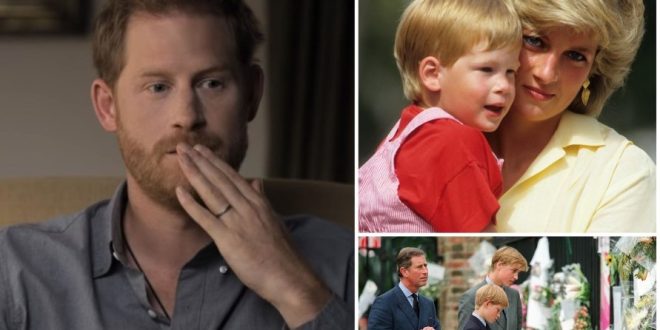 Prince Harry opens up about his upbringing as a royalty

Being a member of the royalty means living a life under the spotlight. The same goes for the British Royal family, probably the most famous family in the world.

One would assume that having the Queen of England as your grandmother is all about glamour, but the truth is that having your life exposed to the world is not pleasant and Prince Harry has experienced that first hand.

He first spoke of the issues he experienced as a child in the tell-all interview he and Meghan gave Oprah Winfrey shortly after they made the decision which angered his family, to step down from their royal duties and settle in California. Neither his grandmother, nor his brother and father were happy with the revelations Harry opened about.

Among the rest, he said he felt trapped until he met his wife. “I wouldn’t have been able to because I myself was trapped, I didn’t see a way out. I was trapped, but I didn’t know I was trapped. But the moment that I met Meg, and our worlds collided in the most amazing of ways and then [I began] to see how trapped within the system, like, the rest of my family are.

“My father and my brother, they are trapped,” Harry added. “They don’t get to leave, and I have huge compassion for that.”

Although these words enraged his family, Harry didn’t stop there. Later, during an appearance in the podcast Armchair Expert, the Duke of Sussex said: “I don’t think we should blame anyone or point the finger at anyone, but when it comes to parenting, I’ve certainly experienced pain and suffering and that’s because my parents suffered too. I’ll try to get those feelings are genetically inherited anyway, so as parents we have to do everything we can to prevent something like this from happening to our children,” he began his confession.

“They were part of the youngest, most respected and only group ever. I was on one side and the rest of the country on the other, watching you.” They sounded like the Truman Show – have you seen the movie? The show’s online host asked, to what Harry replied, “Yeah, it’s kind of a cross between the Truman Show and the zoo.”

“Somehow you got cast in a movie without even being asked if you wanted it or not,” host Dax Shepherd added.

“The biggest problem for me is that I was born there and inherited all the elements without even having a chance in the election,” Harry replied.

He also revealed that his mother, late Princess Diana did all in her power to provide a normal childhood for him and William, which wasn’t the case with his father, Prince Charles.

Referring to his new life in the States, Harry said: “I feel different here, I can ride my bike with Archie without being followed by the media. I didn’t have this chance when I was a child. If you talk openly about your problems, I consider it an act of strength and not of weakness. If we don’t have a healthy mind we can’t take care of ourselves and others, so it’s very important to be careful about that.”

The Prince expressed a wish to put a stop to the circle of suffering, explaining that his father “suffered” because of his upbringing by the Queen and the late Duke of Edinburgh and that he treated Harry the way he was treated, calling it “genetic pain,” as per the Daily Mail.

Today, Harry seems to be living his life with his wife and children to the fullest. Since stepping down from his royal duties, he only visited Britain several times, including his grandfather’s funeral, his late mom’s statue unveiling, and his grandmother’s Platinum Jubilee celebration.

What are your thoughts on this?

Share
Previous Susan Boyle has decided to lose weight and her story is amazing
Next ‘Please Pray For Me’: Justin Bieber Reveals That Half Of His Face Had Become Paralyzed