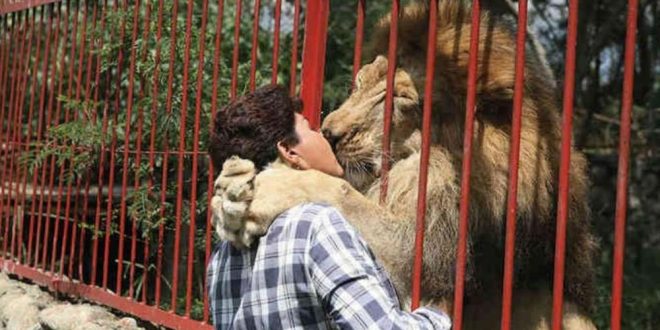 Rescued Lion Says Goodbye To Savior After 20 Years Together

Meet Jupiter, a beloved Lion from Colombia who became famous while living at Refúgio Villa Lorena.

Villa Lorena is an animal refuge like no other.

There is also a chimpanzee called Jocko, spider monkeys and hundreds of brightly colored birds.

One thing they all have in common — they’ve been abused, says Ana Julia.

“I have two human children, and the rest of my children are 800 animals — some clawed and some very hairy, but all of them wonderful,” Torres says.

There are around 800 animals at the refuge, but Jupiter the lion was Ana’s favorite.

She rescued Jupiter from the circus, where he was often abused and had his claws removed.

Understandingly, Jupiter lost trust in humans and even developed a phobia of human contact.

When he was taken care of by Anna Julia, this phobia completely changed.

But the healthy lion was transferred to the Los Caimanes zoo in the city of Monteria.

Officials removed Jupiter from Anna Julia’s care because of her reported lack of documentation to keep the lion.

Sadly, Jupiter rapidly lost weight while at the zoo and became very unwell.

In a bid to save Jupiter’s life, he was transported to an area closer to Ana Julia.

He went to receive treatment in Cali zoo, where vets worked around the clock to care for him.

The vets determined that he was suffering from terminal liver cancer and anemia. He was able to see his beloved Ana Julia one last time.

Jupiter lost his battle against liver cancer and sadly passed away in 2020, but his memory lives on. 🤍