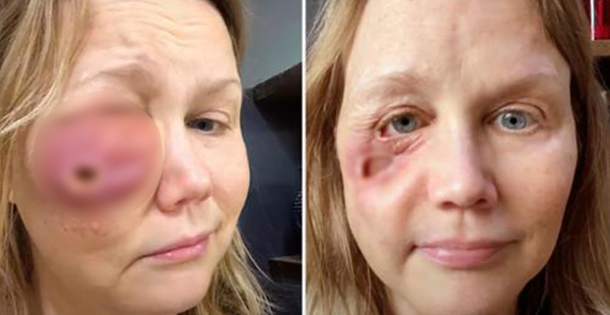 Nowadays is common to alter aspects of your face such as the nose, forehead, lips, cheeks, and more. It is very easy to access specialists and go for plastic surgery.

But it is important to go to a real doctor who knows well what he is doing. This is something Gina understood too late.

She wanted to look better and a colleague helped her with cosmetic fillers. She got a giant inflammation in her right eye and the problem grew until she was left with a hole in her cheek.

She turned to the TV series Botched to get the help she needed. The most important thing is to be comfortable in your own skin.

Her colleague offered to do fillers for her, but she was injected with silicone which inflamed her eyes and cheeks.

Four years later things got really bad and the horrifying effect began to show. It was an inflammation called a granuloma.

It grew large and later it burst open. She went through five surgeries to remove the silicone and the granulomas. She was left with a hole in her cheek.

She had to have two more surgeries at the Botched clinic to correct her cheek. But there were several complications from the procedures.

She had to undergo another surgery, to open up again and remove the infection again. This is her today.