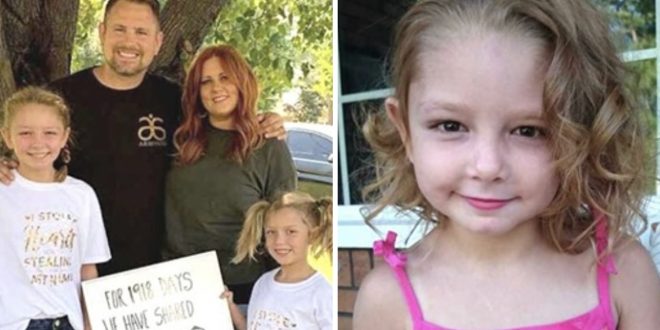 ‘She had a broken arm, sores. She was in over 5 homes in 6 weeks’ – Woman adopts sisters to keep them together

It takes a big heart to give struggling children a home to call their own.

Kim Lacefield, a mom of three, always knew she wanted to adopt a child who didn’t have a family. He husband is a pastor and they know just how much it would mean for a child without anyone to take care of to feel safe and loved.

One day, Kim received a call that changed her life forever. Police officers told her that three ‘God children’ needed a home badly. Kim was confused at first, but the officers explained that the mom of the children was part of the church where Kim’s husband worked.

Without giving it a second thought, she agreed to take the boys in for as long as they needed.

“Thirty minutes later, I had three little faces at my door. They had no clothes other than what was on their back, no toothbrush, no blanket or favorite pillow,” Kim shared with Love What Matters about the first encounter with the boys aged 6, 8, and 10.

The following day, the older children reunited with their father and the 6-year-old stayed with Kim’s family for little over a year.

“Oh, how I loved him. I knew he had a dad who had just been released from prison and he loved his son. I helped him get his son back. I know that might seem strange for some, but the best gift you can give a child is a healthy bio parent who loves them and wants them. If anyone deserved a second chance, it was this father, who was holding a job down and willing to drive 10 hours for his visits.”

Having these children in her home opened new horizons for this mother. She knew she could do the same for other kids in similar position.

A few days after the boy got reunited with his dad, Kim got a call about a 5-year-old girl.

“Later that day, she walked into my house with a trash bag with her clothes in it. I had to take it back outside and leave on the porch. She had head lice, body lice, and pinworms. She had come from a dirty foster home where she said she was made to lay on the floor. In fact, she had been in over five homes in 6 weeks.”

It took some time before Kim was able to get to the girl who refused to communicate. When she started school, the teachers were worried because she was behind her peers. “It wasn’t long before I was getting calls from the school asking me what was going on. She was in first grade and couldn’t trace the letter ‘L.’ She would mess in her pants and wouldn’t change them,” Kim explained.

Both Kim and the girl’s teacher went the extra mile to help the little one get on track. After a year at school, the girl showed incredible progress and was even dubbed a “miracle child.”

“Teachers and school social workers couldn’t believe how far she came in a year. A lot of kids who come into care are 5 or more years emotionally behind their actual age,” Kim said.

Kim was over the moon she gave the girl a new lease on life.

Days passed by and Kim got a call about the girl’s 2-year-old sister. Not wanting the siblings to be raised in different families, she agreed to take this other girl too.

“She had been living with a relative. She had a broken arm and big sores on her skin. She came to me during the day while her sister was at school,” Kim recalled.

“She seemed so scared but after a while, she looked up at my wall of pictures and said, ‘Addy.’ That was her sister she recognized. I will never forget that moment. It has made me passionate about keeping sibling groups together.”

A year later, the girls’ biological mom signed her rights over to Kim and her husband. She couldn’t take care of her daughters because she was in and out of rehab most of the time. But she loved them and wanted to be involved in their lives so Kim offered her to visit her daughters whenever she wanted. Eventually, the mother decided to give her daughters up for adoption and they officially became part of Kim’s family.

“Ever since I was a little girl, I wanted to adopt. The thought of kids not being loved caused sleepless nights even as a child,” Kim said.

“The courts made it happen and both girls were adopted last week on (on the younger sister’s) seventh birthday, 5 years after coming to me with her broken arm.”

Although they now have five daughters, Kim and her husband’s home is always filled with kids because whenever they hear of a child no one wants to foster, they step in.

“I hear this a lot, ‘I could never do what you do, I would get too attached.’ My response to that is, ‘That’s what the kids need. If you don’t get attached, then you are doing it wrong.’ Kids deserve love. It is better for me to hurt than them to keep being hurt.”

Previous Will Smith’s message to Chris Rock after hitting him on the stage
Next Woman poses for pregnancy photos, not knowing it would turn into engagement photo shoot