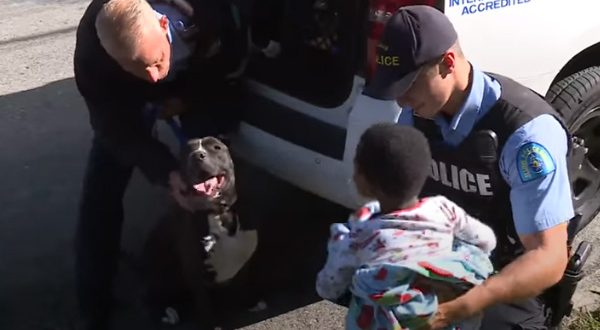 Namely, the kid spent the whole Thursday morning roaming the streets of neighborhoods by himself. Until a neighbor saw him and asked him if he needed help.

In the next couple of hours, the neighbor decided to try and find Kh’amorion’s home. She knocked on doors up and down the street, but she couldn’t find his parents or anyone who knew who the kid was.

She didn’t stop looking though, she went on looking for his house for a couple of hours more, but didn’t seem to be able to find it. Until the boy’s dad saw a picture of his son on the internet. He didn’t waste a lot of time, and immediately went to the given address and picked the little boy up. They can’t understand how their son managed to get that far from home, but they’re lucky that god was looking after their son, and sent a kind soul to save him.

“It is important that we stick together, that we help each other, that we go back to the things that our grandparents and their community used to do,” she added. “That we build a sense of unity.”

Kh’amorion couldn’t say goodbye to the dog. He was repeating the word “puppy” the whole time, implying that he wanted the dog to come with him. But, the family decided against taking the pooch in.

The St. Louis PD on the other side decided to take the dog in and shelter him until he finds a family. And in a couple of weeks, the dog was taken by a family.

Don’t Be Scared of Pit Bulls

Christa Hubbard and her family decided to adopt Peri the chicken when she was only a couple of days old. When they got her home, they managed to keep her healthy for the first couple of months, and later she contracted an infection on her eye. Doctors informed the Hubbard family that the chicken would eventually go blind.

Luckily, the Hubbard family also had a pit bull which they took care of for the past couple of years. The dog was happy to take care of the chicken and managed to help her adjust to her new life.

After Peri went blind, Taj, the dog knew something was wrong and started helping her out.

They lived happily for eight years until Taj died back in July of 2018 after losing the battle with cancer.

After this happened the Hubbard family decided to get two more pit bulls so that the chicken wouldn’t feel lonely.

One of the pit bulls immediately sensed what he needed to do and took care of Peri.

You wouldn’t believe the friendships that animals can form, and I bet that dog and chicken would never be your guess. But, Taj, and Gracie, the other pit bull filled a place in Peri’s life by taking care of her.