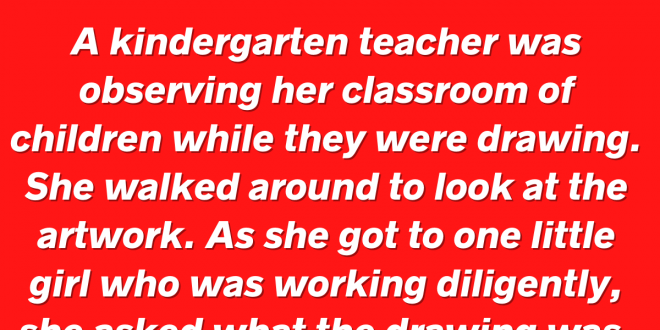 Student Has Hilarious Reply When Teacher Questions Her Drawing

If you of ever spent any amount of time listening to a child talk, it can be a rather interesting experience. They just seem to blurt out whatever is on their mind and their honesty goes along perfectly with their openness. It doesn’t matter what they are saying, they just go ahead and say it and they speak their mind in ways that sometimes take us by surprise. These responses from children are certain to put a smile on your face and let you know why we love them so much.

1. A kindergarten teacher was observing her classroom of children while they were drawing. She walked around to look at the artwork. As she got to one little girl who was working diligently, she asked what the drawing was.

The girl replied, “I’m drawing a picture of God.”

The teacher paused and said, “But no one knows what God looks like.

Without missing a beat, or looking up from her drawing the girl replied, “They will in a minute.”

2. A little girl was talking to her teacher about whales.The teacher said it was physically impossible for a whale to swallow a human because even though it was a very large mammal its throat was very small.

The little girl stated that Jonah was swallowed by a whale.

Irritated, the teacher reiterated that a whale could not swallow a human; it was physically impossible.

The little girl said, ‘When I get to heaven I will ask Jonah.’

The teacher asked, ‘What if Jonah went to hell?’

The little girl replied, ‘Then you ask him.’

3. A Sunday school teacher was discussing the Ten Commandments with her five- and six-year-olds.After explaining the commandment to “honor” thy Father and thy Mother, she asked, “Is there a commandment that teaches us how to treat our brothers and sisters?”

Without missing a beat, one little boy (the oldest of a family) answered, “Thou shall not kill.”

4. One day a little girl was sitting and watching her mother do the dishes at the kitchen sink. She suddenly noticed that her mother had several strands of white hair sticking out in contrast to her brunette head.She looked at her mother and inquisitively asked, “Why are some of your hairs white, Mom?” Her mother replied, “Well, every time that you do something wrong and make me cry or unhappy, one of my hairs turns white.”

The little girl thought about this revelation for a while and then said, “Momma, how come ALL of grandma’s hairs are white?”

5. A teacher was giving a lesson on the circulation of blood.Trying to make the matter clearer, he said, “Now class, if I stood on my head, the blood as you know, would run into it and I should turn red in the face.”

“Then why is it that while I am standing upright in an ordinary position the blood doesn’t run into my feet?”

One little boy wrote his own note and snuck it next to the cookies, “Take all you want, God is watching the apples.”

Previous Teacher Has Hilarious Reply When Asked Why Teachers Drink.
Next Hilarious (But Real) Exchanges Between Pilots, Flight Attendants, And Passengers