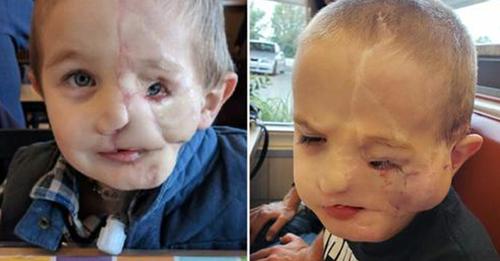 This is one of those stories that make you think twice about how humanity still has a long way to go – a story about a little boy who survived a vicious attack by two Rottweilers and lived to tell the tale. But due to the attack’s severity, he was left with a disfigured face, and society started calling him a “monster.”

The boy’s name is Ryder Wells, and he was merely 21 months old during the attack. It was Thanksgiving of 2015 when he and his mother, Brittany, visited their family friends. The mother speaks about the horrific incident below:

“We were eating breakfast and Ryder was back and forth to his toys and back for bacon then he disappeared.

“I looked out of the window and he was face down in the garden.

“He had pyjamas on and they’d been completely ripped off so he just had a sleeve on. When we picked him up and rolled him, his face was just gone.

“He’d been around the dogs before and they’d been fine so I don’t know what happened.

“The doctors said they would do what they could but we weren’t expecting him to make it.

“They said it’s a miracle that he’s still here because he was so small and the injuries were so severe.

“He had to have a tracheostomy because of the punctured lung and they thought that the dogs had bitten so far into his skull that he would be paralysed.”

During the attack, Ryder lost his entire right cheek, more than half of his lip, his teeth were crushed, his right lung was punctured, and his arm was broken. He was airlifted to the hospital, where he received more than 14 straight hours of surgery; that was any mother’s biggest nightmare to withstand that much anxiety and uncertainty.

But thankfully, the 21-month-old boy had a lot of fight in him and survived the surgeries – but with a permanently disfigured face. He had undergone more than 50 facial reconstruction surgeries. Ryder will undergo more surgeries in the future to fully heal himself.

The sad part is how people react when they look at him. As described by Brittany:

“He knows that people are talking about him but he doesn’t say much. He wears glasses and a cap and sometimes he’ll hang his head to hide his face.

“I try to deal with it in a better manner so it doesn’t affect him so much. But I just tell him every day that he’s beautiful, different is beautiful and it’s ok to be different.

“I just reassure him as much as I can but I’m absolutely terrified about when he goes to school. There are always going to be a couple of kids who aren’t kind.

“When he started kindergarten, the kids learned about Ryder before they met him so they wouldn’t be as shocked.

“You always want your kid to be accepted and to fit in.

“Just because he’s different, it doesn’t make him less of a person.”

But at least there’s a glimmer of hope for the boy; he has a supportive group of friends, and everyone in town seems to love and support him. Brittany said:

“He’s really adapted. He has a great group of friends and people in the town know him now so that boosts his confidence. He’s been amazing how he’s adapted after what he’s been through.”

Ryder is now five. The family has started a GoFundMe for the boy’s future surgeries and treatments. We wish Ryder the best life and hope people can be more kind towards those of us who struggle – the world truly is a cruel place.

Previous Goldie Hawn removes her makeup so we can see what she really looks like.
Next He lost his sight as a result of a nightly blunder we all commit!