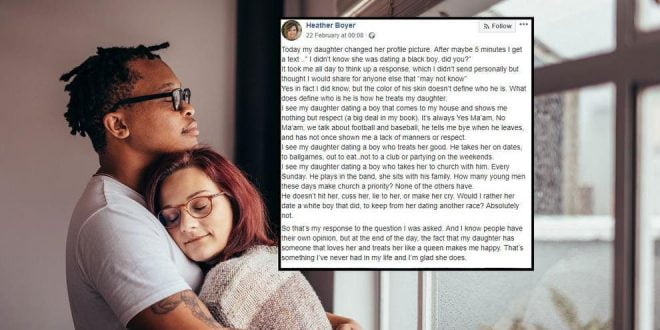 This mum received a text asking if she knew her daughter was dating a ‘black boy’. Her response was perfect

A mother’s response to a text message asking if she knew her daughter was dating a black boy is being shared online – for all the right reasons.

Heather Boyer took to her Facebook page to address the unnamed nosey contact – and any others who might have taken issue with her white daughter romantically involved with a black boy.

It all began when her daughter changed her Facebook profile picture to her and her man, and some five minutes later someone questioned the relationship: 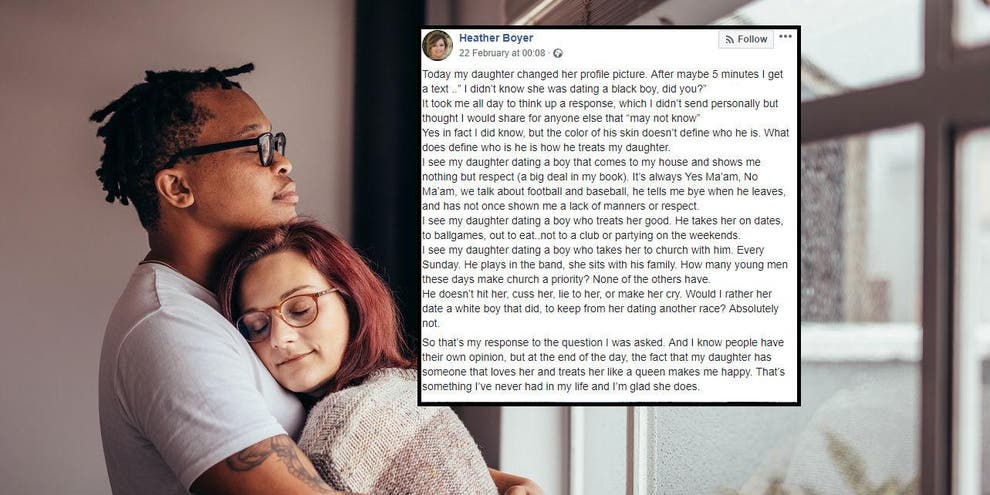 “I didn’t know she was dating a black boy, did you?”

Her mum hadn’t known how to respond, and spent “all day” trying to come up with a response.

Instead of sending it to the offending person, she uploaded the photo of her daughter and the boyfriend, and wrote the following caption:

Yes in fact I did know, but the color of his skin doesn’t define who he is. What does define who is he is how he treats my daughter.

I see my daughter dating a boy that comes to my house and shows me nothing but respect (a big deal in my book). It’s always Yes Ma’am, No Ma’am, we talk about football and baseball, he tells me bye when he leaves, and has not once shown me a lack of manners or respect.

I see my daughter dating a boy who treats her good. He takes her on dates, to ballgames, out to eat..not to a club or partying on the weekends

I see my daughter dating a boy who takes her to church with him. Every Sunday. He plays in the band, she sits with his family. How many young men these days make church a priority? None of the others have.

He doesn’t hit her, cuss her, lie to her, or make her cry. Would I rather her date a white boy that did, to keep from her dating another race? Absolutely not.

Mama Boyer concluded the lovely post by saying that her daughter is with someone who “treats her like a queen”.

That’s something I’ve never had in my life and I’m glad she does.

The Facebook post received more than 180,000 comments and was shared upwards of a quarter of a million times.

Another person added: “What a great answer. I hope it hits home with everyone. They make a beautiful couple.”

Previous Prince Harry has his own nickname for the Duchess of Cambridge, Kate Middleton
Next This Guy Wears Tacky Dress At A Funeral. When I Learned The Truth, It Broke Me.