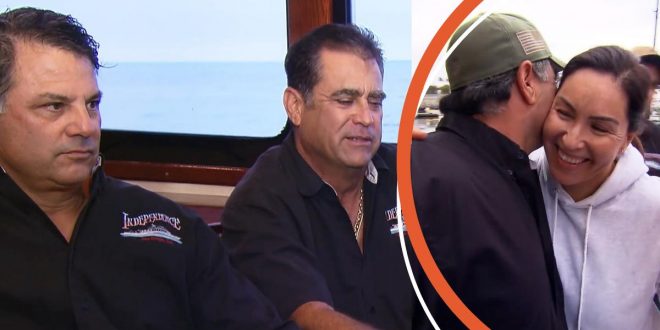 Two Fishermen Save a Drowning Girl and Dissapear – 35 years later she finally finds them!

Being alone in a shipwreck might be one of the scariest thoughts I’ve ever had. And, Desiree Rodriguez Campuzano, a 9-year-old girl found herself in the middle of this situation, stranded in the middle of nowhere, alone, and with no one to help her. Desiree and her family decided to go on a fishing trip back in May of 1986, and their boat capsized somewhere near Catalina Island in California.

Desiree and her family, including her 5-year-old sister, aunt, and uncle, mother, and father were all on the boat in difficult weather with fog and chilly wind surrounding them. It didn’t take a lot of time for the Pacific to take everybody’s life except the 9-year-old girl’s life. Even with the life jacket, she was wearing she wouldn’t be able to last long in the cold pacific waters. Luckily a commercial fishing boat with Mark Pisano and Paul Strasser saw the little girl in the water and as soon as they realized that it was a human drowning in the cold waters of the pacific they stripped down and jumped into the water.

Campuzano remembers it like it was yesterday! She stated that she didn’t think that she would’ve lived if it weren’t for Paul and Mark.

The fishermen knew they didn’t have a lot of time, so as soon as they hit land they took Campuzano to the hospital. There, the doctors treated her for hypothermia and exhaustion. Not too long after her traumatic experience, another aunt and uncle adopted the little girl. They helped her in every possible way. Her new parents even took her to therapy to help her get through the trauma of losing her whole family, but as Desiree stated for The Times, it didn’t help her at all.

“Desireé was a ghost,” Strasser spoke for The Times. “We saved her, she’s out in the world. And that’s all we know. We had no clues on anybody that knew how to get ahold of her.”

Desiree stated that she too thought about the fishermen from time to time. One time, she even tried looking for them through Oprah Winfrey, but she didn’t find success in her trials.

But, December, last year, was another tipping point in Campuzano’s life. Philip Friedman launched a podcast in which he speaks with fishermen, and on one episode he spoke to Pisano. In that episode Pisano spoke about the day when he and his friend rescued Desiree.

As faith would have it, 41-year-old Pablo Pena was listening to the story while traveling to work. And in his mind, he was remembering the story he heard from a young girl 17 years prior to this moment. But, he wasn’t sure that the fisherman was talking about the same story. Until, moments later, Pisano mentioned Campuzano’s name, and that’s when Pena was sure. He called Friedman who planned a meeting for the three people. He had Desiree there and he said that she was a translator. Not too long after the start of the interview, Friedman revealed the true identity of the “translator” to the two fishermen.