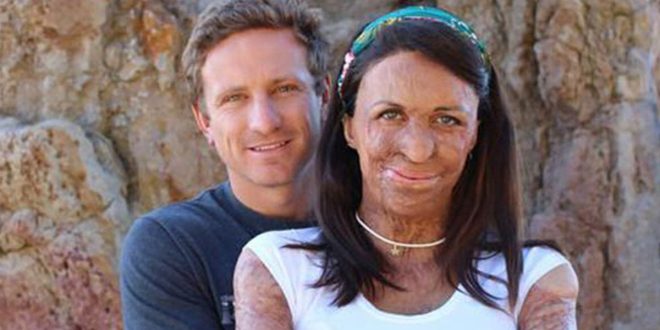 Former model Turia Pitt was running a marathon in Australia when she got trapped in a bush fire. She got severe burns on 65% of her body and her doctors weren’t sure if she would survive. At that point, her boyfriend, Michael Hoskin quit his job as a police officer to take care of her full-time. Despite the hard times ahead, he stayed by her side.

Since the fire, Turi has undergone 200 operations. In addition to the severe burns over her body, she lost seven of her fingers and spent two years recovering. Recollecting the fire, Pitt said she felt a “bubbling feeling of panic.”

On her website, she describes, “I remember the hot Kimberley sun beating down, burning my already burnt skin. I remember accidentally sitting on a bull ant nest. Staring in confusion as the ants started swarming across my legs. I remember trying to drink some water but spitting it out because it was boiling hot. I remember seeing bits of my skin stuck to the rocks and spinifex.”

That salvation came in the form of a helicopter. Later on, Pitt learned the helicopter pilot was Paul Cripp and he risked his life to save her and a few other runners. “He was my savior,” Pitt said. “…He was flying me towards help, to doctors and nurses and hospital air con and a glass of cold water. I also didn’t know how dangerous it had been for him to fly down the gorge to us. That balancing the chopper on one skid was the result of sheer gutsiness and extreme skill.

In 2015, Michael proposed to Turia with a diamond ring he had purchased when she was in intensive care four years prior. For two years, Turia had to wear a mask to aid her injuries. Throughout her recovery, Michael would tell her, “You’re beautiful.” They married in 2016 and they couldn’t be happier. It’s been tough for the last seven years.

“Going to sleep next to my partner I never thought anything of before. Now I think how lucky am I get to sleep next to this beautiful man. He’s a good guy and I’m very lucky to have him,” Turia Pitt said. “Every day I wake up beside Michael is a great day.” [2]

Ever since the fire, the couple worked together to rebuild and move forward. “She doesn’t want people to feel sorry for her. She just wants to get on with her life,” Michael said. “She’s beautiful, she’s amazing.”