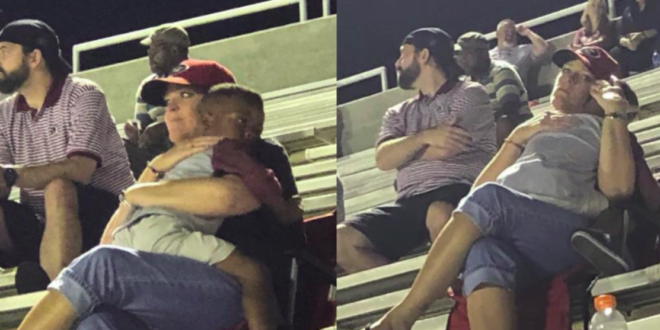 A Little Boy Crawled Into A Stranger’s Arms, and Her Reaction Goes Viral

The best things in life really are free. And simple. And kind. One stranger is going viral for a humble act of kindness that she barely even thought twice about—but it meant everything to someone else.

It all started during a sports game when a little boy named Isaiah Miller wandered up to a stranger named Angela on the bleachers. He sat in her lap, and they chatted, and then she left. It was a quick interaction, that no one thought really meant much, it was one that would make a lasting effect on this little boy, as well as his family.

Just two weeks after this first interaction, Isaiah and Angela were both back at a game, and Isaiah had spotted his new friend.

“Isaiah walked right up to her smiling, crawled in her lap and laid his head down on her shoulder,” Star Balloon-Bradley, Isaiah’s aunt, recalled on her now viral Facebook post. “She welcomed him with open arms. This lady patted and rocked Isaiah to sleep like he had given birth to him. It was the sweetest!”

In her post, she added some photos of Isaiah snuggling up to Angela (who Star refers to as “Mrs. Angela”) on the bleachers.

“Isaiah can come across shy at first, but some people he immediately warms up to, and Mrs. Angela During is one of those persons,” Isaiah’s mom, Thameka Miller, said. “He can discern if a person needs a hug, and he loves elderly people.”

Star repeatedly told Angela that she was sorry if Isaiah was “bothering” her, and that it was totally okay if she didn’t want to entertain him, but Angela kept waving her off, saying he wasn’t bothering her at all.

She just continued to cuddle him, and loved every second of it—especially since she has 15-year-old of her own, and these moments are long gone for her. 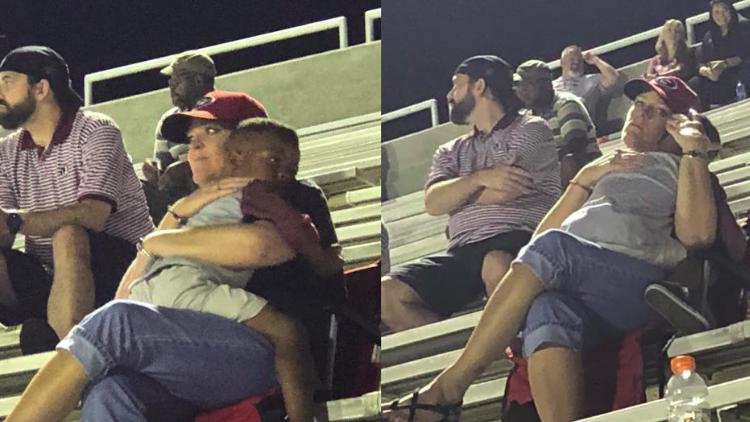 Star’s post has been shared almost 350,000 times and has over one million likes. And Star thinks she knows why it’s gaining so much attention.

“With all of the racial tension that’s going on I’m glad to see the pictures like these because it goes to show color don’t matter to a lot of people,” Star said in her post “Arguing over stuff as such makes us miss the simple pleasures in life.”

Thameka also thinks the popularity of the post stems from people feeling emotional about race knowing no bounds, especially through the eyes of a child.

“I think with the racial tension that has manifested lately this story helps to restore hope in humanity and it shows the power of love,” Thameka said. “Also the innocence of a child and how love has no color boundaries.”

As for Angela, once she learned Star posted the photos about her, she couldn’t help recall how blessed she herself felt. “I am humbled by the kind words every one has spoken. Isaiah is absolutely adorable! I pray people will Jesus in all this & know His love is beyond measure & that is how I want to love & life my life. I’m not worthy but He sure is!”

How sweet is this story? What do you think of these adorable photos of Isaiah and Angela?