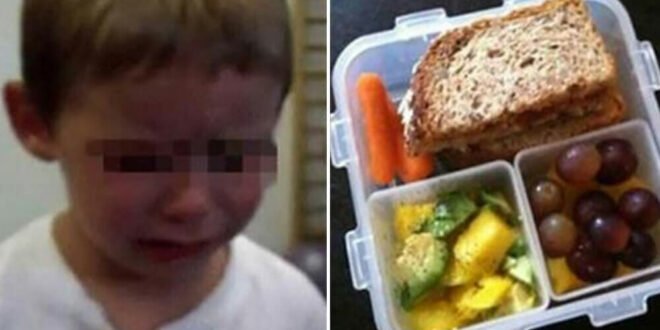 Although eating healthy is essential for having a fit body and being in a good physical condition in general, doing it is not really as easy and as straightforward as it looks. With the tight schedules, most of us barely find the time to consume any food, and cooking it ourselves is many times quite impossible.

But when it comes to our children, we do our best to teach them to eat healthy from an early age so that it becomes their habit.

One mom from Canada, however, complained that her young son’s school staff went too far when they regarded his home-brought lunch unhealthy and threw it in the trash.

Durham Catholic District School introduced a healthy eating initiative and started serving the kids healthy food only. They asked from the parents to support this idea and mind what they put in their children’s lunch boxes.

So, this mom packed her son a slice of banana bread that he loved. To her surprise, the teacher considered the choice unhealthy because it had chocolate chips in it so she just took it and threw it in front of everyone. The crying four-year-old boy who was in distress had grapes for lunch that day, as it was all he was left with after his lunch was taken away from him.

Mom Elaina Daoust was left infuriated because her son had to go through such an unpleasant experience.

“He came home with a chart (listing healthy snack ideas) and told me he and the teacher talked about it and healthy choices. She also sent a note to me. I was really, really, really mad for several reasons,” Elaina told The Star.

Some of the items the staff forbade from being eaten inside the school building were Goldfish crackers, juice boxes, granola bars, chocolate milk, string cheese, and fruit snacks.

As it turned out, Elaina’s boy wasn’t the only one who was left without his lunch as around 30 other parents said their kids experienced the same thing.

But the school believes they have all the right to take the unhealthy food from the kids as healthy eating is now part of the school curriculum and students have to distinguish between what’s healthy and what’s not.

However, not everyone agrees with the school’s policy as James MacKinnon, a teaching and learning consultant with the school board says “There is nowhere in our policy or procedures that says our staff is allowed to take food away from a student.”

What do you think of this school’s policy? How would you react if you were in this mom’s shoes? Share your thoughts with us in the comments section below.

Previous A Little Boy Crawled Into A Stranger’s Arms, and Her Reaction Goes Viral
Next Kevin Costner discovered love after more than 10 years of loneliness