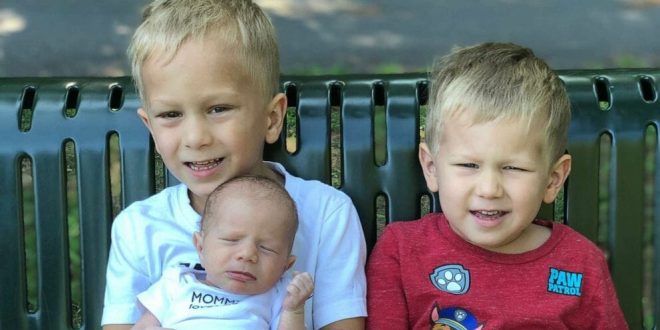 An Atlanta, Georgia family is currently facing an incredibly tough battle, all three of their sons have retinoblastoma, a rare eye cancer. Their youngest is only six months old and he just started six months of chemotherapy.

Five years ago, Angie and Aaron Rush’s oldest son, Tristen, was diagnosed with retinoblastoma. He was only a few weeks old when Angie and Aaron learned of his diagnosis. He immediately began receiving treatment at Children’s Hospital of Atlanta.

Two years later, Angie gave birth to Caison and the family had to go through the same process they went through with Tristen. Caison was one-week-old when he began treatment.

Then, only six months ago their youngest, Carter was born. On January 6, the Rushes learned Carter had retinoblastoma in both of his eyes.

While shocking to most, it’s not that much of a surprise. Angie had retinoblastoma when she was an infant and lost her left eye when she was six weeks old. She knew there was a 50 percent chance she’d pass the disease to her children.

“I feel a lot of guilt, knowing that this is something I could pass down to them. But I also know that I’ve been blessed,” Angie told 11 Alive.

Although Carter just started his first round of chemotherapy, their family is optimistic about the boys’ futures.

“They are warriors,” Jeanne Rush, the boys’ grandmother, told WTHR.

The family has set up a GoFundMe to help pay for the mounting medical expenses while all three boys undergo treatment.

I pray that this boys are healed and that this family receives the financial help they need.