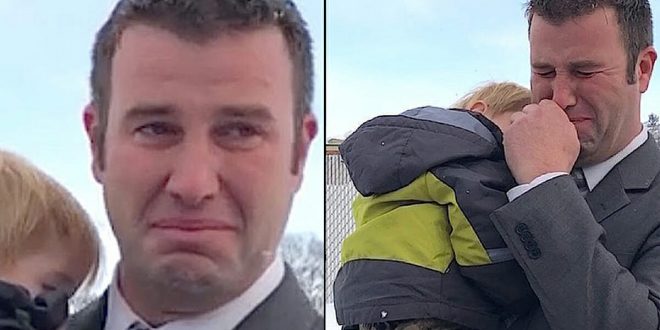 Life is unpredictable. In one moment you have it all, and in the next, everything turns upside down leaving you wonder how things can get a wrong turn in such a short time.

Dakota Nelson’s life changed in an instant after his loving wife passed away. He was left to take care of their seven children all by himself. The sad event happened earlier this year when the couple spent the day cleaning around the garage. Dakota went to the house to quickly grab something and when he returned he saw Ream lying on the floor. She was unconscious, her face was blue, and she wasn’t breathing.

He did all he could to try to save her, including CPR, but once the paramedics arrived at the scene they told them how her brain went without oxygen for around 20 minutes. She was taken to the hospital where she spent several weeks in coma, after which she left this world. What caused her dead is still a mystery.

Dakota found himself in a desperate situation. He knew he had to make sure he provides a nice life for his kids aged 1 through to 16. So, he started working three part-time jobs in order to be able to pay for the bills. He was torn between bunch of commitments and all the errands he had to run every day.

But this grieving widower and a single father never lost hope.

A random stranger stumbled upon the story of Dakota and decided to do something amazing. With Christmas just around the corner, his deed was a real holiday magic that will change this family’s life and will significantly ease the financial pressure Dakota was feeling.

The “Secret Santa” handed Dakota an envelope with $10,000. This money were more than enough to cover some of the family’s expenses and came just in the right time.

This made Dakota shed tears of joy. He couldn’t believe there are still loving and compassionate people out there.

If you’d like to help Dakota out in anyway, head over to the GoFundMe page created by Ream’s sister.

Watch the amazing video below:

Share
Previous If You See A Plastic Bottle On Your Tire, Be Warned
Next Prince Harry ‘Humiliated’ By Meghan Markle Announcement