Jacquelina Adan worked hard and lost 350 pounds. She felt both excited and nervous when donning a bathing suit on the beach for the first time in a very long time. And a few cruel onlookers nearly ruined the huge moment by pointing and laughing. But this incredible woman had come too far to let that happen. And her response is so inspiring!

Jacquelina used to weigh over 500 pounds. And for years, she refused to wear a bathing suit. But after an inspiring weight loss journey, things have changed! 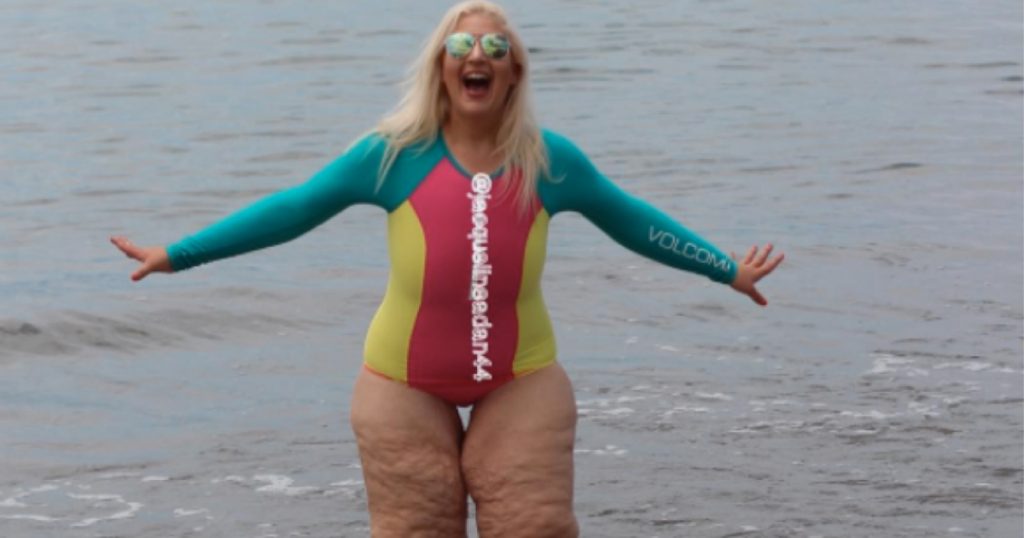 The preschool teacher realized her life needed a complete overhaul after a humiliating experience at Disneyland where she got stuck in a turnstile.

“I was pretty much mortified,” she said.

After finally getting free, she ran to the bathroom and cried. But after the sobs subsided, Jacquelina decided to make a change. She hadn’t weighed herself in years, and when she saw the number on the scale — 510 pounds — she couldn’t believe it.

“I thought I was going to pass out,” she said. “This could not be real life.”

Now Jacquelina was even more determined. She was going to get control of her weight!

Of course, changing your life is no easy task. But that’s what makes Jacquelina so inspiring. She didn’t seek out some “quick fix.” She dedicated years to consulting with nutritionists, eating right, and exercising. And because of all of her hard work, Jacquelina lost 350 pounds.

Woman Who Lost 350 Pounds Get Bullied

Years after her humiliating trip to Disneyland, Jacquelina headed to Mexico for a vacation. Having lost 350 pounds, she decided she was ready to wear a bathing suit without a coverup — something she hadn’t done for so long.

“I was nervous to take my cover up off and to walk into the pool or walk on the beach. I still felt like that same 500 pound girl,”Jacquelina explained.

But Jacquelina was ready to face her fears.

If the folks around her knew how much blood, sweat, and tears had gone into that moment, perhaps they’d have cheered as Jacquelina shed her cover up. Sadly, though, only one couple took notice. And they cruelly pointed and laughed at Jacquelina.

“I would have allowed their comments to affect my vacation and I probably would not have gone to the beach or pool again,” she says.

But she’s a changed woman!

While the nasty reaction still bothered her, Jacquelina decided not to dwell on the opinion of two complete strangers. Instead of letting their response bring her down, she took a deep breath, then chose to smile and walk into the pool.

“That was a huge moment for me,” she said. “I had changed. I was not the same girl anymore.”

While she’d lost 350 pounds, it wasn’t just Jacquelina’s body that had changed. Her heart changed, too. Cruel teasing and comments still hurt, but she realized her worth had nothing to do with what other people thought.

“That’s when it hit me … they have no idea about my weight loss, so why am I going to let their opinions affect me? How I feel about myself is what matters,” she says. “And so that’s exactly why I smiled at them and jumped into the pool!”

God has an amazing way of turning our pain into purpose. Since starting her weight loss journey, Jacquelina has been blogging about it in the hopes of inspiring others. And after sharing her body-shaming experience on Instagram, it quickly went viral.

“Knowing that it has reached so many people and that I am getting so many comments and messages of people telling me how much this post has helped them truly means the world to me!” she says. “I want people to know that if I can feel confident and beautiful in my body, with lots of loose skin, even after losing 350 lbs., then I hope they can focus on who they are and forget everyone else who tries to bring them down!”

And this amazing woman who’s lost 350 pounds has some tips for other people looking to lose weight.

1. Be realistic when setting goals.

When Jacquelina started her weight loss journey, she knew she ultimately wanted to weigh less than 200 pounds. But instead of focusing on the huge, daunting number, she broke her weight loss goals down into smaller increments.

Getting back in shape takes time. When Jacquelina first started exercising, she could only manage a five-minute walk before she got tired. But she didn’t quit. She kept walking for five minutes until she could do 10. Then she kept at it until she could do 15. Then 20, and so on. She’d do as much of a workout video as she could manage. And as she persisted, she built up her endurance. Remember, Rome wasn’t built in a day!

If you’re serious about weight loss, you’re going to need some help. Find someone to help hold you accountable. It’s harder to quit when you know someone’s watching. When Jacquelina wanted to skip a workout because she was too tired or sore, her fiancé worked out with her.

Once she started going to the gym, she enlisted help from trainers. They made sure she wasn’t skipping workouts or taking it too easy. If an exercise was too tough, they helped teach her modifications to keep her moving.

4. Ignorance is not bliss.

We often view the scale as our foe and avoid it like the plague. After Jacquelina gained a lot of her weight, she steered clear of the scale. But living in denial only resulted in her gaining more weight. She realizes now her avoidance of the scale was a mistake.

“If I knew the number I might have started sooner,” she said.

“I need to feel myself in my body and figure out how I feel instead of letting the scale pick the number,” she said. “I want to base my [success] on how I am feeling once all the surgeries are over and I am actually finally able to see my body.”

“I know this journey can be hard and it can be scary. I know when other people make fun of us, and judge us and try to bring us down that it is so hard to just brush it off. But I promise that with time, you can learn to not take those comments and those people to heart,” she says. “Because those people and how they feel about us don’t matter – it’s how we feel about ourselves that matters!”

Previous What Judge Judy Stated About The Incident Following Her Mini-Stroke Live On TV
Next She hurried her kid to the hospital when he arrived home with a red mark on his face.