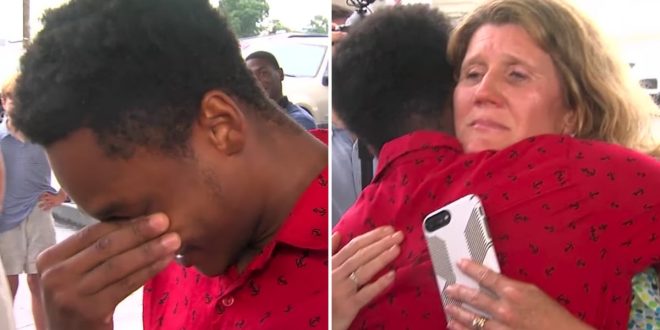 They say that determination and hard work always pay off, and the story of Walter Carr, a young man who wouldn’t let anything stay on his way to a successful first day on his new job, is just another proof of that.

Namely, Walter got hired by Bellhops, a moving company. He was looking forward to this new chapter of his life, but the night before he was supposed to start working, his car broke down. Not wanting to miss his first day on the job, he decided to take a walk from his hometown of Homewood to Pelham, two cities 20 miles away from one another.

He started his journey at midnight hoping to get there on time.

A few hours into his walk, Walter met an officer who asked him where he was going. The young man explained what was going on, and the officer was left in disbelief from what he heard. Of course, he then offered Walter a ride to the house he was supposed to be working at that day.

At around 6:30 am, both Walter and the officer knocked on the door of the Lamey family. Jenny Hayden Lamey answered the door. The officer told her he took “this nice kid” to her so he could help her move her staff. Jenny was expecting the moving company hours later, so she was surprised Walter was there so early. At the same time, she was amazed by his determination.

“Around 6:30am the doorbell rang. It was a police officer. He proceeded to tell us that he had picked up ‘this nice kid’ in Pelham early this morning. The nice kid. Walter, said that he was supposed to help us with our move today,” Jenny wrote on Facebook.

When the rest of the moving crew showed up, one of them shook Walter’s hand and thanked him for showing up. This made Jenny believe that not many of the new recruits show up. It was then that Jenny turned to the man in charge of the crew and said, “you wouldn’t believe what he did to get here. Tell him Walter,” to what humble Walter replied in a shy manner, “I walked.”

The entire crew was in complete awe. They later shared the story with the company’s CEO, Luke Marklin, who without hesitation offered Walter his car, 2014 Ford Escape.

Walter couldn’t believe what he was hearing. He was extremely grateful for the gift, because that meant he wouldn’t need to walk long distances any longer.

As for Marklin, he was glad he could help someone who had such a strong sense for work ethic as young Walter.

You can learn more of this story by checking out the video below.

FacebookTwitter
Share
Previous Woman Was Upset And Told Grandmother That Her Husband Cheated On Her, Granny Had A Great Response
Next A research reveals your body knows when death is near, and it all starts in the nose