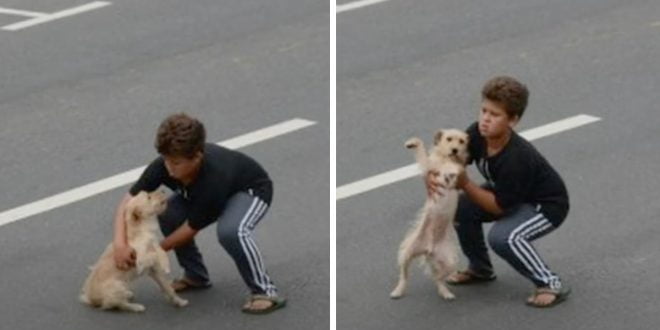 While most of the people don’t even care about other beings on the planet, some are ready to go above and beyond, only to know them safe. Even though he’s just 11-year-old, this boy proves that you don’t have to be a giant to be a super hero. All after he put his own life on the line, to rescue an injured dog.

Jean Fernandes from Brazil, was walking down the street when spotted a dog crying in the middle of the road. Apparently, the helpless creature got hit by a car and the driver ran off, leaving him in agony, local news outlet Globo Rural reports.

Fortunately, the 11-year-old hero, could not just stand and watch the dog suffering. He knew he had to do something, so he rushed in the street, stopped the traffic and then grabbed the dog into his arms and has taken him to safety.

Thankfully, the noble gesture didn’t passed unnoticed as a local caught on camera the heartwarming moment. Photographer Rafael Martins captured a few snaps of the scene and then shared it online. Expectedly, the post immediately went viral on Facebook with lots of people showing admiration for the boy’s beautiful gesture. One person has perfectly described the moment; “This little boy is already larger than many men,” the woman wrote.

Asked about his son act of kindness, Jean’s mother said his gesture comes as no surprise for her, because he’s great fond of animals since she can remember. More, she said her son is always willing to help hopeless animals. The dog that Jean rescued, named Mel – Honey in English – has been taken to a local shelter where he got medical treatment for his injuries and it is expected to fully recover soon.

Previous Soccer Star Cristiano Ronaldo Reveals Heartbreaking News: His Baby Boy Died During Birth
Next Incredible before and after pictures of Shaun Weiss