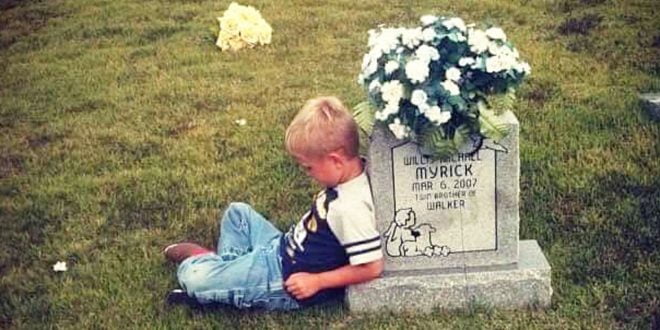 It’s an image to melt the hardest of hearts.

Leaning back on the grave of his twin brother, Willis, Walker Myrick (who was 5 years old in the photo) bows his head and silently relays the details of his exciting first day of kindergarten in Greenhill, Alabama.

It is a moment of pure, spontaneous affection and something his mom, Brooke Myrick, captured on her iPhone because she knew it was “really special” to her now 9-year-old son.

“I parked and he ran up ahead as I was unstrapping his baby brother from his car seat. All I had with me was my iPhone. I wasn’t anticipating taking a photograph. But when I walked up and saw him like that, it was just one of those moments where you think: ‘This is really special.’ “

Walker sat beside the grave because he wanted to share a private moment with his twin. He was only there for a couple of minutes and when he was finished “he was all smiles,” says mom.

The tragic story behind Walker’s graveyard vigil began in the 24th week of Brooke’s pregnancy, when she was told that she’d contracted a condition called Twin to Twin Transfusion Syndrome (TTTS).

A rare disease of the placenta, TTTS only affects identical twin pregnancies and essentially prevents the nutrients from flowing equally to each fetus. The result is that often one – or both – of the babies can become fatally starved of the essentials they need to develop.

It is not hereditary or genetic, nor is it caused by anything the parents did or did not do. TTTS can happen to anyone – and tragically for Brooke, it happened to her and husband Michael, 31.

“I was 24 weeks when we found out but they said that it had been at least a week, so we really don’t know when Willis passed away,” says Brooke.

“That was the thing with being pregnant with twins — I was still feeling movement, so I didn’t know that I had lost a baby.

“We had already been shopping when we found out. We had cribs, clothes, toys… You’re expecting to bring two babies home,” she says through tears.

In the immediate aftermath of her labor, Brooke was so drained from having to remain resolutely strong for Walker throughout the remainder of her pregnancy (Walker was born at 32 weeks), that she became physically and mentally exhausted.

Walker was wheeled to Brooke’s bedside that night, but it wasn’t until two days later that she mustered the strength to visit Willis’ body at the Huntsville Hospital for Women and Children. However, it was at this moment that the enormity of the situation got the better of her and she suffered what she describes as “a breakdown.”

“I just wanted to see my baby,” she says.

Brooke openly admits that she “really struggled for several years” to come to terms with the loss of Willis. Thankfully, through lots of prayer and positive thinking, better days lay ahead.

Acting on the advice of a counselor, Brooke decided to be open with Walker about the fate of his twin from the get-go and regularly took him to the cemetery so that he could place a Hot Wheels car or other trinket beside Willis’ grave. The parents also set aside a shelf in their home for Willis, so that Walker could bring the items back and always see his brother’s toys around the home.

“Even as an infant I would always talk to him about Willis and he would smile,” says Brooke. “At 1 or 2 years old, he would run up to the grave. We would say, ‘That’s your brother. That’s where your twin brother is.’ Because I always wanted him to know where he was going. I always wanted him to know that was an open area of his life and not to grow up ever thinking, ‘I can’t talk about my brother.’ “

This openness continued with the arrival of siblings Jolie, 8, Cooper, 4, and Bryant, 2 – and prompted a sudden, dramatic suggestion during a family car journey back from Ohio, with Walker once again the inspiration.

“We had gone to a fundraising walk and on the way home he asked, ‘Could we do a walk?’ And I said, ‘Well, maybe when you’re older. We’re so busy.’ I kind of brushed him off,” says Brooke. “Then he said, ‘I want to do it for my birthday,’ so, of course, I couldn’t say no. He was like, ‘I want to raise some money for my brother.’ “

At that moment, the Walker and Willis Birthday Walk was born, complete with fundraising T-shirts and a silent auction. It has since become an annual event, donating $2,500 dollars each year to the TTTS Foundation. The idea is simply to raise awareness of TTTS, which affects 4,500 pregnancies (and 9,500 or more babies) in the U.S. every year.

“It’s probably about a mile-and-a-half, and Walker talks to everybody. He laughs. He talks about his brother. It is a very healthy thing,” says Brooke. “At a certain stage in pregnancy they can detect TTTS through ultrasound. So one of the main things is for women to understand that if they are pregnant with twins they need weekly ultrasounds because it happens so fast.

“That’s why we do what we do. I could very well have lost both of my babies through this and so many people have never heard of it.”

Brooke now believes that Willis inadvertently saved the life of his brother.

Despite the obvious trauma of his early days, Walker has developed into a happy, Batman-watching kid who plays center field, supports the Alabama Crimson Tide and already has an eye for the ladies!

Like most kids, he also breaks things, loses his temper, gets into trouble and regularly drives his parents nuts.

“He’s not a perfect child by any means!” jokes Brooke.

What he does have, however, is a special connection to a brother that started in the womb and has continued into Walker’s everyday life – and influenced many of those around him.

“If something good happens — like, when he won the spelling bee a few weeks ago — he’ll always say, ‘I talked to Willis.’ Or sometimes he will say, ‘I had a dream about Willis.’ He says that he feels really close with him when he does,” explains Brooke.

“Usually it is when something good happens. He likes to feel like he can share it with his brother, just like if his brother were here.

“One year he played football. It was the second year of his walk and all the boys on his team knew that it was coming up. Walker started wearing this armband with his brother’s name on it when he was playing. Then before it was over with, seven or eight of his teammates wanted one. They all came to me after classes and I paid to have them made. I just thought, ‘If they want one, then I’m going to do it for them.’ That whole year they wore their Willis armbands and after the games sometimes they would say stuff like, ‘Did you see I had my Willis armband on?’

“His friends know about it and they are all comfortable talking about it. It’s a positive, not a negative.”