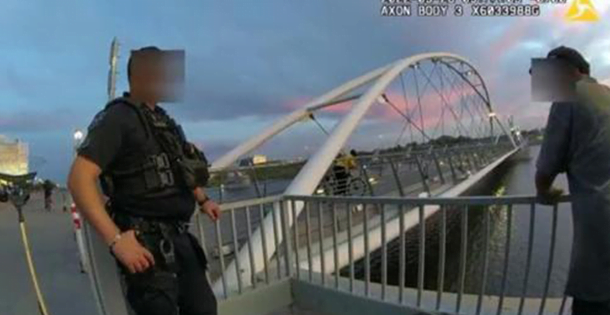 Arizona Police Officers Stood By As Man Drowned In Lake: I’m Not Jumping In After You

According to the body camera footage and the transcript, a man drowned in an Arizona lake and cried for help while struggling in the water.

The police officers were standing there and declined to rescue him. Sean Bicking perished in the water while the body camera transcript showed an officer saying, ‘I am not jumping in after you.’

Bickings had a nonviolent confrontation with his wife before, and the police officers were informed to check them. It was that moment he told the officers that he was going ‘for a swim.’

He takes a seat on the water’s edge and says ‘I am going for a swim, it is true that I am free to leave?’

The officers told him he can’t swim in the lake because it is not allowed. But Bickings dives into the water and swims away.

The officers didn’t attempt to pull him from the water but discussed how far he will be able to swim.

He was heard saying ‘help me, I am going to drown.’

What is your plan right now? one of the officers asks.

I am going to drown replies Bickings.

The officer says ‘no, you are not.’

‘I am drowning.’ replies again Bickings.

The last part of the transcript wasn’t made public because it was too sensitive. The case is now being investigated.

What do you think about this? What should have done the officers? Share your thoughts in the comments on Facebook.

Previous Sarah Palin divorce: New partner, children and husband
Next Susan Boyle has decided to lose weight and her story is amazing