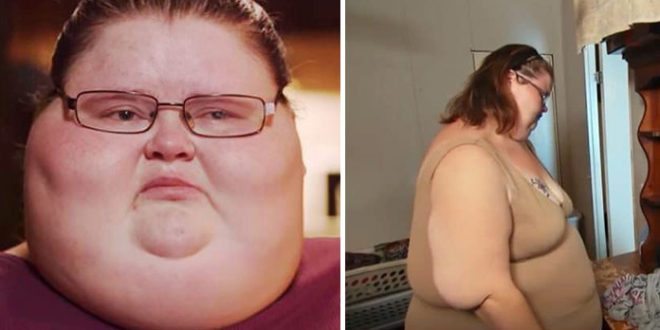 Ashley Bratcher from ”My 600-Lb Life”: This is her life today

I don’t know how many seasons I’ve watched of TLC’s series ”My 600-lb Life” – but I will always remember the first time I saw Ashley Dunn Bratcher’s overwhelming and inspiring weight loss journey.

Sure, all the patients in the reality series have their unique backgrounds and story, but there was something about Ashley that captured mine and many others hearts.

The 27-year-old, from Kemp, Texas, checked in as one of the heaviest participants in the fourth season and the clock was quite literally ticking on her life.

When Ashley Bratcher entered TLC’s “My 600-lb Life” in 2016, she weighed in at just over 725 pounds. As with every patient on the reality series, the Texas gal sought the help of Dr. Younan Nowzaradan.

The 27-year-old had been morbidly obese for most of her life, but doctors gave her the shocking news that she would most likely not live past 30 if continued her eating habits. That was a huge wake up call for Ashley, who had begun comfort eating huge amounts of food and candy when she was only 6 years old.

Ashley’s weight made it almost impossible for her to move. She was in constant pain and forced to ask her five-year-old son to help her with the everyday household chores.

”He’s my legs, he helps me with just about everything. Without him, I’d be lost,” Ashley explained before joining the show in 2016.

The only thing Ashley managed to do by herself was shower, but even that was a fierce battle, since she could only stand up for five minutes at a time.

“The normal things that everybody does are just impossible for me to do because of my size,” Ashley said.

From the outside, it was quite difficult to understand how Ashley ended up in this negative spiral. After all, she married her high school sweetheart and they were blessed with a beautiful son. But when Ashley opened up about her childhood in the retrospective that starts every episode, it all made sense.

At the age of 6, Ashley and her siblings were abandoned by their mother, who was a drug addict. Ashley soon turned to food for comfort. By seventh grade, she weighed 250 lbs.

Looking back, Ashley blamed her mother for her food obsession.

”If my mother had been paying attention I think she could’ve changed a lot of stuff that was going on. As the oldest one, I felt like I had to protect my brother and sister because they were really little. So I let it happen to me, so it wouldn’t happen to them,” she explained.

In the end, Ashley decided to fight her eating disorder for her son’s sake.

Dr. Nowzaradan, a weight loss surgeon who specializes in obese patients, put Ashley on a calorie-restricted weight loss program to begin with.

The results came immediately as the highly motivated Ashley lost a whopping 123 pounds. After that, the doctor approved that Ashley could go through with gastric bypass surgery. The operation was successful, but then Ashley had some setbacks. Four months after her surgery, she was rushed to the hospital and had to remove an ulcer and her gallbladder.

But by the end of her inspiring journey, Ashley had lost 255 pounds and regained control of her life. Thankully, her determination paid off.

Since her participation in ”My 600-Lb Life”, there’s not been much news concerning Ashley. But in 2018, she appeared in an episode of “Where Are They Now” – the last public update from her life.

In the episode, Ashley revealed that she had undergone surgery to remove excess skin, something that hampered her movement and self-confidence. She also announced that she weighed under 300 pounds, and that she had been forced to buy new outfits that fit her. It seemed that Ashley learnt how to control her food consumption, and no longer used sugar to fill an emotional hole.

If you want to follow Ashley’s everyday life today, she has a Facebook page and an Instagram account. Judging from the pictures she’s posting, you can clearly see that she has lost a lot of weight and lives a healthier life.

If she feels angry, sad or happy, she says she goes for a walk instead of eating.

“Surgery is just a tool. It does not change your mindset,” Ashley says.

In a recent update on Facebook, Ashley revealed that she and her husband celebrated a special day – their 12th anniversary.

”I just want to say Happy Anniversary baby. I love you so much. We’ve been through so much these last 10 years it’s crazy but I wouldn’t want to face it all next to anyone else. Thank you for everything you do for our family. I love you baby and I hope for many more years together. BTW I love my ring baby???. Thank you. It’s perfect,” Ashley wrote.

She and her husband Jake met when they were young, in high school, and fell in love immediately.

Jake has always been a great support to Ashley, he has loved her no matter what and always understood why his wife turned to food for comfort.

Seeing people reach their goals in spite of obstacles is always incredibly inspiring. No matter what their aim is, I believe everyone can benefit from a good role model – and mom Ashley Dunn Bratcher is certainly a role model! I’m so happy for your progress.

And long as you are happy and healthy, life is great!

Great work, Ashley! Wishing you a long and healthy life with your beautiful family. You are absolutely stunning and a complete inspiration to all us women thin, thick, medium, whatever size!

Share Ashley’s inspiring journey so that all your friends get to hear her brave story!