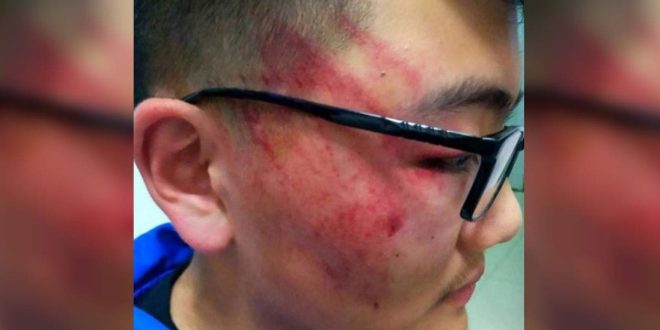 Teachers are educators and they help mold our children’s intelligence and personality. They act as the second parent at school. They have the responsibility to teach the student life’s lessons but they should never be hurt emotionally and physically. Cruelty at school can never be justified.

A mother was shocked when her son got back home from school with a bright red palm print on his face. An educator at Suyu High School supposedly slapped the kid over and again so hard that it left a mark on his face. As per reports, the instructor slapped the kid, nicknamed Xiaochen, 12 times.

The senior secondary school student was being penalized for conversing with a schoolmate during a self-study session. This cruelty caused a concussion to the student and a few blood vessels near his eye burst and he is being treated at the hospital for the injuries that he incurred.

The Beijing Time shared a footage of Xiaochen while he is still at the hospital, lying in his bed at Suqian Chinese Medicine Hospital. The red marks on his face are very prominent and they are looking like a palm, extending from his forehead and down to his mouth. According to Xiaochen he also suffered temporary hearing loss because of what happened.

Reports from Yangtze Evening News states that the teach dragged Xiaochen from his seat and began hitting him in front of his classmates. One of the students can still recall what happened and said, “The teacher lost his temper and first slapped a girl before hitting Xiaochen. ”

The family of the victim has already filed a police report against the teacher. The incident was already reported to the city’s Education Ministry and the teacher in question was already dismissed and reportedly deducted his bonus from the previous academic year. The school also agreed to pay for the student’s medical expenses. There are still no reports whether the teacher is facing charges or not.

Daily Mail shared this story and thousands of people were angered by what this educator did. One of the commenters wrote, “No child should ever have to endure this. Especially for an authority figure. Terrible.

” Another commenter stated that he should be banned from getting near any children. Because of what happened to Xiaochen, more and more videos of the same kind of abuse in China are being shared online to spread the awareness of what can possibly happen inside the classroom.

One of the videos that caught the public’s attention where a lady teacher was shouting and slapping a helpless girl. These horrifying realizations started a debate among the commenters. A person noted that this does not really happen in all schools from China and this must have been an isolated issue.

The teacher might have experienced beating from his parents when he was a young child and this reflects his action towards his students. However, other commenters claim that this kind of teacher-student treatment does happen in China because of Communism and this is normal.

Nobody knows the true classroom state in China, except for these students. Still, no matter how bad they have been behaving at school, they do not deserve to be abused. We condemn bullying worldwide and teachers should be a role model to his or her students. Educators are in the classroom to educate, not to physically punish other students for not following their classroom rules.