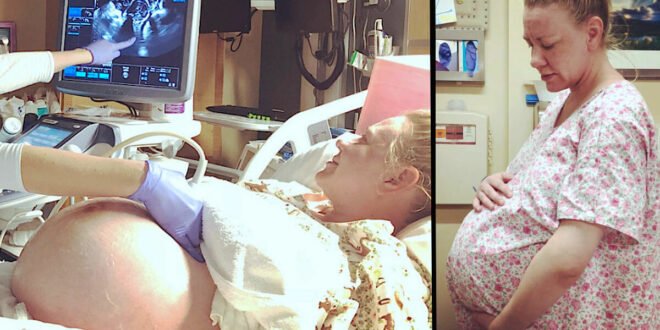 Jamie and Skyler Scott of St George, Utah, have always dreamed of having a big family. They already had two sons, but wanted more children. However, getting pregnant again was more difficult than they assumed.

After five years of trying, they turned to IVF treatments. After a couple of tries, Jamie’s pregnancy test finally showed two red lines.

The entire family was over the moon. They couldn’t wait to welcome another bundle of joy. Little did they know, however, that they would get more than what they hoped for.

As the level of HCG hormones was pretty high at Jamie, which is usually a sign of multiple pregnancy, she suspected she was carrying twins so she booked an ultrasound. To her and her husband’s surprise, they heard five heartbeats.

Jamie was advised to consume around 4,000 calories a day. “It’s a little much because it’s already like having a giant pumpkin in my belly. I feel full all the time, but yet I’m hungry and thirsty all the time. I have to eat more small meals throughout the day but packed with high-calories,” she said at the time.

Since multiple pregnancies are pretty complex, the family moved to Phoenix, Arizona, where Jamie was kept under the constant supervision of experienced obstetricians, among which Doctor John Elliott who has helped delivered 24 sets of quints and 108 sets of quadruplets. That meant Jamie was in safe hands.

“I wanted to be a great mother for all these individual human beings, and I was thinking about how we were going to do this. Then, I just had this overwhelming peace come over me, and just this message, ‘Just be love.’ I thought, I can do that,” Jamie said.

“Our goal was 32-and-a-half weeks. Dr. Elliott’s goal was 34 weeks,” this mom told LDS Living. “Given that our little Logan wanted to come at 21 weeks, I am so grateful that our babies stayed put until 29 weeks. I am just amazed at how well they are all doing.”

Babies Lily, Violet, Daisy, Logan and Lincoln were born on March 21, 2018 at the St. Joseph Hospital and Medical Center in Phoenix. They were all delivered in under 60 seconds and all of them weighted just under 3 pounds. Luckily, they were all perfectly healthy.

“The messages of love and hope that we’ve received from around the world have really helped strengthen us to get through this tough time of very, very high risk pregnancy,” Jamie said.

The little ones are now nearly four years old and have plenty of followers on social media.

Previous Everything you need to know about Jack Schlossberg, JFK’s nephew
Next Hospice patient couldn’t speak, watch what happens when nurse starts singing to him