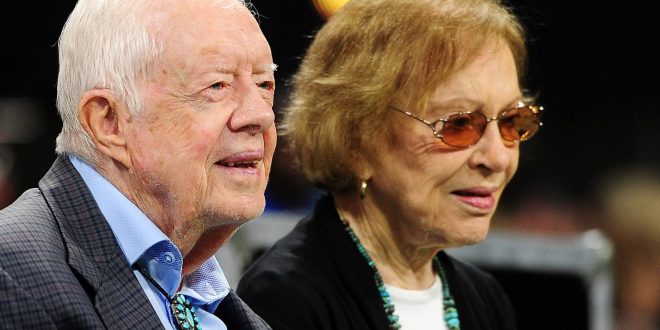 You may imagine that a president will not choose to live a humble life after leaving the White House because he is accustomed to a particular lifestyle. Still, former President Jimmy Carter is proving this is not always the case.

Jimmy Carter, at 97 years old, is the oldest president in history, and he has demonstrated that it is possible to live a humble life after leaving the White House.

Despite his prior lifestyle, Carter embraced simplicity in his post-presidential years, living in a $100,000 home and dedicating the majority of his money to charity. This indicates that presidents can change their lifestyles after leaving office and emphasizes the necessity of providing an excellent example for the American people.

The former president and his wife decided to live in the house they constructed together in the 1960s after leaving the White House. They have been married for 76 years and have a strong relationship. The house is in Plains, Georgia, where Jimmy Carter was born on October 1, 1924.

Jimmy was born in a little town of only 600 people, but his family was well-known because his father was a successful businessman and his mother was a nurse well-liked by the other residents. Jimmy and his family lived in their hometown for an extended period, and Jimmy attended high school there.

In 1941, he graduated high school and wanted to join the army like his father. Jimmy initially chose Georgia Southwestern College but then transferred to Georgia Institute of Technology. He was admitted to the Naval Academy in 1943, when he met his current wife, Rosalynn. When Jimmy met Rosalynn, he felt a connection with her.

Jimmy and Rosalynn married in 1946, and Jimmy remained in the Navy. However, he was compelled to quit the Navy when his father became ill and died in 1953. Jimmy then decided to continue the family business.

Jimmy and Rosalynn returned to Plain once the decision was made. They already had three children, but they hoped to expand their family, so Jimmy constructed a ranch-style home.

It was ideal for him and his family, who resided there until Jimmy became involved in politics. However, he demonstrated his love for the mansion he created by returning when he retired from politics.

Jimmy stated that he never intended to take advantage of his presidential popularity and does not hold other presidents responsible for doing so. He knows many previous presidents try to capitalize on their celebrity after leaving office, but he thinks this is right.

Jimmy also stated that he never aimed to be a wealthy or well-known guy, only to be able to financially support himself and his wife after retirement. He eventually discovered that he enjoyed writing and began to write about his life and career. He and his wife can live comfortably because he has a $ 217,000 annual pension and an income from selling his books.

It is worth noting that Jimmy Carter and his wife choose a simple and low-key lifestyle. For example, Jimmy disclosed in 2011 that he frequently shops at the local Dollar General for clothing and prefers to fly commercial rather than private.

Furthermore, according to the General Services Administration’s 2019 fiscal year budget, Carter cost taxpayers $ 456,000 – much less than the $ 952,000 planned for former President George H. W. Bush. Bill Clinton, George W. Bush, and Barack Obama cost taxpayers one million dollars. Another notable aspect of Jimmy Carter’s philanthropic activities is that he has assisted in the construction and renovation of over 4,300 homes in 14 countries.

Rosalynn stated that she and her husband decided to repair their home independently because it was an activity they enjoyed and had experienced.

She said that after renovating so many properties together, they knew precisely what they wanted and needed to do to achieve the desired effect. The two are the type of folks you want to spend time with and learn from. Their home is just what we anticipated: comfortable and warm.

They’ve figured out what works best for them and how to create the look they want. Working on these projects together has brought them closer as a pair, and they now have a lovely home to show for it.

Jimmy Carter is interested in capitalizing on his celebrity. Instead, he desires a calm life filled with happiness and fulfillment. As a result, he is an inspiration to all of us.

Previous Here is what the investigators found at the scene of Aaron Carter’s death.
Next The unique thing of Prince Harry and Meghan Markle’s daughter