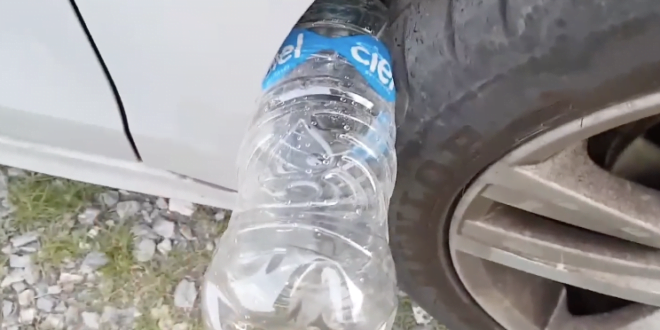 If You Ever Happen To Find A Bottle Stuck In Your Tire, Back Away Immediately And Call The Police

There seems to always be a new con or scam being reported in the news.  Criminals are constantly adapting their ways and trying different things in an effort to benefit themselves and cheat innocent people out of their hard earned money or possessions.

The creativity and ingenuity behind some of these tricks can be unbelievable, but usually it’s the simpler ones that people end up falling for. Police are sounding the alarm and trying to get the word out about one such scam involving a plastic water bottle.

Apparently, criminals will stick a regular old empty plastic water bottle in between a car tire and the wheel well. When the car owner turns their vehicle on and goes to drive, they’ll hear the water bottle breaking as it gets crushed, causing them to stop so they can investigate the terrible noise.

Part of the trick is placing the water bottle on the passenger side, so that when the driver gets out, they must go around the car to have a look. Not really thinking or expecting to be held up for more than a brief moment, the driver more than likely will leave the car on when they exit.

That’s when the criminal springs into action, hopping into the driver’s seat and taking off.  In a matter of seconds, a car can be stolen without the driver even knowing what really even happened. There are variations of this crime that involve a number of different items meant to distract the driver.

Sometimes money is placed under the windshield wipers or a random article of clothing is stuck on the front/rear windshield so that it blocks the driver’s view just enough to make them get out and move it.  Most people are completely unsuspecting or unaware of these tricks and so think nothing of it until it happens to them.

For more details and information on the plastic bottle ruse please refer to the accompanying video.  Don’t forget to pass this warning on and get the word out so more people know and can protect themselves as well.

Have you heard about this? Let us know!

Previous Dad is surprised to find his son’s room clean – a minute later, he finds a letter that crushes him
Next Sarah Jessica Parker’s no makeup photo shows her beautiful natural look